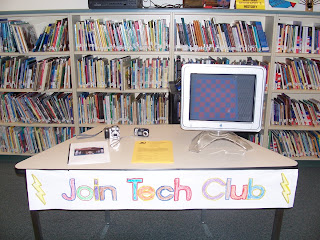 Last week I held three promotional meetings for Tech Club during lunch recess. We met in the library since it is a public place where many students already congregate. I found last year during my Action Research that moving Tech Club from an out of the way room to the library got more students to participate. I also asked three girls and a boy who participated last year to help me run the meetings by describing what each of the projects was about, by helping to answer questions, and by taking photos of the meetings.

In conjunction I made a template that said "I like Tech Club because..." and gave it to students from last year's Tech Club. I asked them to hand write a couple sentence that answered that question, then I took their photograph. I used the color laser printer to print their photo at the top of the page, then I mounted each of them to construction paper and laminated them before posting them in the 3-5 grade hallway. Many students stopped to read the testimonials from their peers. I figured that the students could do a much better job selling the club than I could. 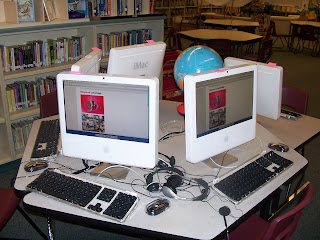 The first day a student and I described the digital photography project, building web pages with our images, updating the new student comic book, and perhaps creating new comic books. I used the five library iMacs to load the web page on the school's intranet with the photos last year's Tech Club students took, captioned, and assembled into web pages. Turnout was good: there were about twenty-five students who came to the meeting and picked up permission forms that allow me to post their work on the internet. The second day we talked about podcasting. I brought the JuiceBoxes out with episodes of last year's podcasts for the students to listen to. Additionally, I used the iMacs again to display the RSS feed of the podcasts so students could also use the computers to listen. Attendence was not as strong, but I did have students come two days in a row.

The third day we watched the movies that students made last year. This was a popular promotional meeting because everyone loves Lego stop-motion films.

I felt good after the promotional meetings because I had many students who attended, as well as those who missed the meetings, come up to me afterwards to inquire about joining and asking when we were going to start the projects. Tech Club is going to rock this year, with more girls participating, Autistic students continuing to participate, and more exciting projects!
TechClub