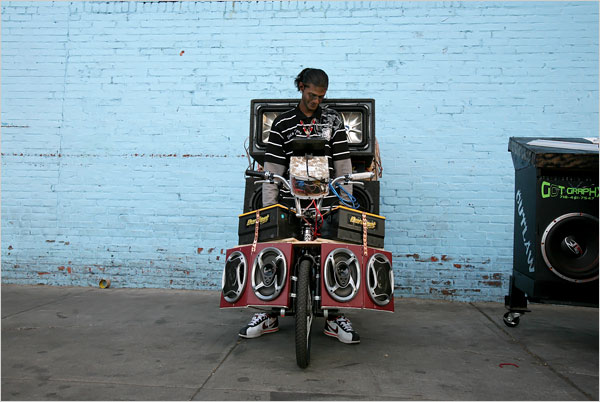 Corey Kilgannon wrote an excellent article and Tyler Hicks (whose work is sampled above) captured amazing images of the bicycle sound systems build in Queens, NY by young immigrants from Trinidad and Guyana.

Unwieldy, costly, and loud, these home-fashioned portable sound systems recalled for me the vivid descriptions of the Jamaican sound systems of the 1950s in Dick Hebdige's Cut 'N' Mix: Culture, Identity and Caribbean Music. The men building the bikes in Queens play "Caribbean beats," according to Mr. Kilgannon, but the early Jamaican sound systems were devoted to American RnB music brought over from the United States.

As the years passed, the demand for black American RnB in Jamaica grew stronger. But there were no local groups who could play the music competently. So large mobile discotheques called "sound systems" were set up to supply the need. The sound systems played imported RnB records at large dances which were held in hired halls or out in the open in the slum yards. The music had to be heavily amplified at these venues if it was to convey the right sense of conviction. And if people were to dance they had to hear the bass, which carried the important "shuffle" rhythm. So the systems got bigger, louder and "heavier" (Hebdige, 1987).

The systems grew so large, loud, and bass-heavy, in fact, that Junior Lincoln, a Jamaican record producer, remarked, "You've never heard anything so heavy in all your life" (Hebdige, 1987). The early sound systems were built and run with money making in mind, drawing huge paying crowds. But as reggae music developed as a Jamaican sound, the sound system returned as a potent means of expression. Hebdige explained,

The sound system provides an opportunity for the grassroots people to talk back, to respond, to choose what they like and don't like. At the blues dances, the people can dictate the dj's choice of sounds. And each sound system has its own toasting heroes who can express the feelings of the crowd (1987).

It is very interesting to me that these men in Queens are blaring their Caribbean beats, interspersed with some American favorites: they are using the sound system as a means of cultural pride and identity rather than playing on it the music of the colonialists, like the Jamaicans of the early 1950s. It would appear that the sound system that reggae developed in the mid-1970s and which allowed for expression of a cultural form of music has carried on in this path and continued to develop as a means of expressing one's heritage through music, in this case songs from Trinidad, Guyana, and elsewhere in the Caribbean.

The Cloverdale Kid said…
Brilliant sound there...
Too bad I am so far from Queens...I fear I will never see one of these on the streets of Cloverdale CA, unles I build my own - now there's an idea :)
November 8, 2008 at 8:36 PM

Unknown said…
you don't have to live in queens to see a "street party bike". i'm building my second one, a trailer this time in eugene oregon where i've already seen a couple other 12v trailer systems. one was playing heavy metal and the other techno.

i'd bet a nickel that you see one in california within 10 years. there are a lot of lowrider trike & trailer systems though nothing like the Queens' style monster systems.

people have built all kinds of rigs from duct taping speakers to their handlebars to trailer systems with lighting effects.

just keyword "bicycle sound system" at youtube, and you can see dozens of systems in action. i'll post a video of mine there too once it's rolling.

by all means, build your own rig. you could do something as simple as put a pair of bookshelf speakers in your saddlebags and power them with a little battery powered class D amp like i did my 1st system on instructables.com. you can get nice looking lepai units at ebay for around $20 that can be converted to battery use easily.
February 19, 2010 at 2:05 PM