A trove of documentation related to Apple's A/UX 3.0, codenamed Hulk Hogan, has been scanned and uploaded to the internets. Of particular interest to this nerd is the documentation for Finder 7.0 and its inclusion as a binary with A/UX 3.0. The Finder environment, taken from Apple's Macintosh operating system, was the means by which the A/UX and Macintosh user could interact with the files, folders, and storage devices on the computer. It was meant to be intuitive and easy to use, a real boon for a UNIX-based system like A/UX. In fact, this was the approach Apple would return to after acquiring NeXT and Steve Jobs and refining the Rhapsody OS into what became Mac OS X.

An optional feature in the no-longer-confidential Apple A/UX 3.0 Confidential Beta Release document is the UNIX Processes Icon, represented above. This cute little daemon would be installed on the Finder's Desktop environment and would function as a folder, or directory. 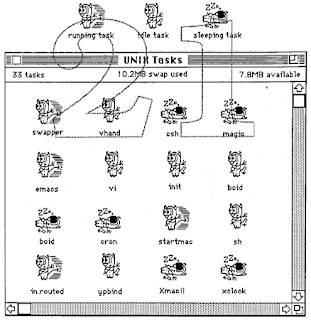 When the user opened the UNIX Processes directory he or she could see all the UNIX processes currently running in a graphic representation of the UNIX process state, be it running, idle, or sleeping. How cute! The developers also proposed that looking at the same window in list view could provide a dynamic ps listing.

Getting Info on a particular process would present a dialog box that allowed the user to adjust the process' scheduling priority: 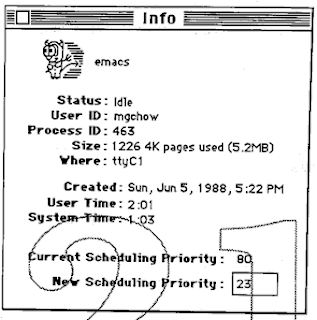 Furthermore, a process could be killed by dragging its icon from the directory to the Finder's Trash Can, though it was still under debate among the developers whether it would be an outright "murdered with a sure kill" or a SIGTERM, which promised "less malice."

Mac OS X chooses to insulate the user from the UNIX underpinnings than did A/UX. The reason for this, I believe, is that way back when people purchased A/UX systems they did so because they liked the ease of the Macintosh Finder environment but needed a UNIX workstation for the type of academic or professional work they were doing with their machines. The A/UX user wanted to be reassured that they were using a UNIX machine, not just a Macintosh, so felt more familiar and comfortable with encountering the UNIX underpinnings that power the system. For ease of use Mac OS X hides the BSD cogs and wheels that power the system but does provide users access to all the directories from the Finder environment.

The graphic representation of UNIX processes was a fascinating User Interface consideration that the Apple A/UX team considered early in the development cycle. It did not make the final 3.0 release, but was an interesting diversion.
A/UX daemon Mac OS X nerd UNIX user interface