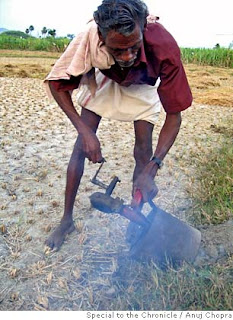 Mr. Krishnan Chinnapayan, the Christian Science Monitor reports, is the proud new recipient of a better rat trap. Mr. Chinnapayan, a member of the Irula Hindu caste, has the unenviable job of catching rats, a pest endangering the crops of more than 100 million small farmers in the Indian states of Tamil Nadu and Andhra Pradesh. Traditionally, Mr. Chinnapayan and other members of his caste would use a hand-operated air pump to flush the rats from their burrows using smoke. The work was dirty and inefficient: four or five rats could be caught a day using this method. This hardly makes a dent in the rat population, with a female rat producing upwards of 1,000 offspring during her lifespan.

The new steel rat trap, shown above in a photo taken from the SFGate.com, uses a hand-operated air pump that reduces the risk of burns and respiratory problems caused by the old pumps. The Development of Disadvantaged People in Chennai introduced the new traps in 2004. Using such traps, catches have increased to between 15 and 20 rats a day.

Using a World Bank grant, Sethu Sethunarayanan, was able to provide 4,000 Irula families with the new traps. He plans to some day provide the traps to all Irula families through a credit installation plan.
caste extermination India microloans rats