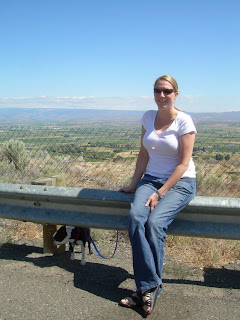 We left Seattle a little later than I anticipated and got the road trip started. The first day would be one of our longer drives: eight to nine hours from Seattle to Caldwell, Idaho. The weather was cold in Seattle: 49 degrees on our departure. Considering we would be headed to triple-digit temperatures, we did not complain.

We drove out via I-90 to Eastern Washington, with Meg taking the first two hour driving shift. Along the way we found a great overlook that captured where we had driven from: 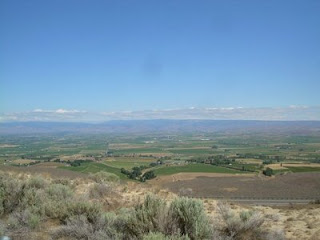 In Eastern Washington we saw what appeared to be either a huge coyote or a dyspeptic wolf wandering along a ridge off the side of the highway. It might have been a feral dog, but it was huge whatever it was. Additionally we saw many osprey: as we came down out of Snoqualmie Pass and were headed to Ellensburg, there were many posts that had been erected so osprey and other raptors could build nests atop the posts. We even saw an osprey with a fish in its talons flying along the highway.

It struck Meg and I how quickly the landscape could change. The colors and the variation in vegetation could change as we rounded a corner. Don't get me wrong: there were some monotonous stretches were we were ready for some more sights, but on the whole the scenery was beautiful.

We pulled into Caldwell and checked into the Best Western Caldwell Inn and Suites which truthfully was one of the cleanest, best-staffed motels I have ever stayed in. The staff was excellent and accommodating and they loved Zoe. The only issue was their proxy server crashed and nobody was able to get on the Intarnets.

We ended up cruising through Caldwell looking for dinner. The restaurant that was in the hotel's binder was closed, so we drove down the one of the main drags, Cleveland Boulevard, where we managed to find The Dutch Goose, a local watering hole. 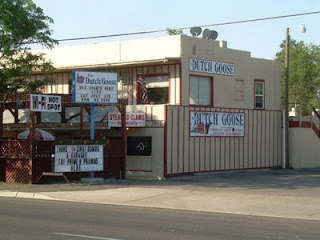 I noticed a banner on the wall announcing $1 domestic drafts but the waitress claimed that it was an old banner. Fortunately the bar tender felt that since it was advertised it was true, so we got our $1 drafts. The Dutch Goose was a true local joint, probably crowded with students from the College of Idaho down the street during the school year. We ate the best chicken fingers we had ever had: prepared on-site with a tasty panko breading. Yummy!

Gas Mileage for the day according to GeekGas: 35.2402 mpg over 292 miles in a 2006 Ford Focus Wagon with a 4 cylinder DOHC engine.
Caldwell gas mileage Idaho road trip Washington