Playing with the Fire Organ 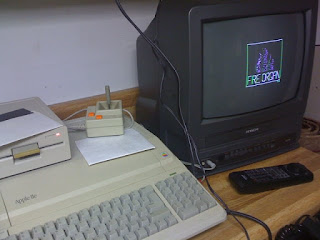 Yesterday was a snow day at school and what better way to spend it in the darkness of the basement playing in my computer lab? A while back, after a discussion on comp.sys.apple2 about the 1980s computer movie Electric Dreams, Michael Mahon pointed out the old application Fire Organ. I downloaded it at the time but never got around to looking at it. Well, this weekend I stumbled upon the program and did some googling.

Richard Bramante has an excellent description of Fire Organ so I will direct you that way if you are interested in the program. I ended up downloading the version linked from his site as it contained the "liner notes" for the program.

It had been a while since I netbooted my Apple IIgs and turned a .dsk image into a 5 1/4" floppy disk. 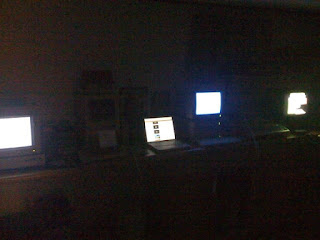 I don't know if is the netbooting but disks I made using Dsk2File sometimes don't work. I ended up using Asimov to make the disk and it worked perfectly. 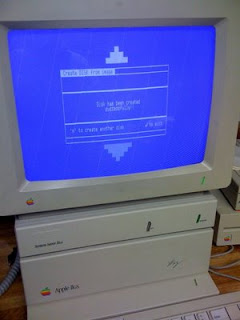 Once I had a disk I was ready to start playing with the Fire Organ. I followed the liner notes that Brooke Boering, the author of Fire Organ, provided about recommended songs to listen to while watching the Fire Organ. When I noticed that he suggested Frank Zappa and the Mothers of Invention's "Help I'm a Rock" as one of the songs I knew that this would be a fun experience. Here's the graphics for that song, S Box: 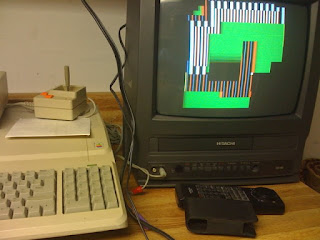 Next I moved on to Key-Q CWA and The Grateful Dead's "The Eleven." This was a great one: 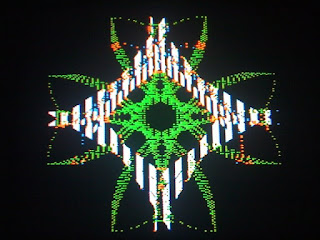 I liked Key-X MSX and Pink Floyd's "Have a Cigar" because the graphics were broken into four quadrants: 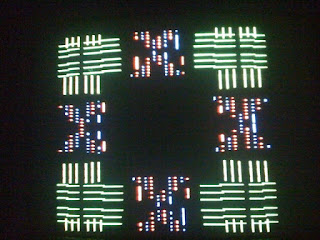 For Key-N A Led Zeppelin Explosion I selected "The Ocean" from their live "How the West Was Won" disc: 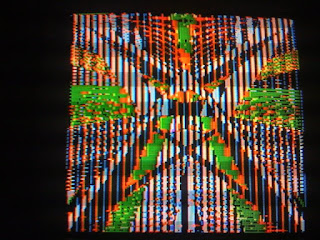 I wrapped it all up with Key-6 Visions of Pink Floyd and listened to "Astronomy Domine:" 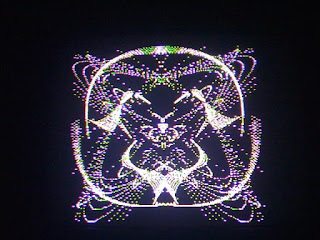 While Fire Organ might pale in comparison to the visualizer in iTunes, for example, it was amazing to experience the fluidity and creativity of the visuals. Of course any music would have been fun to listen to while watching the visuals, but I thought it a fun exercise to try out some of Mr. Boering's suggestions. The Fire Organ reminded me a bit of Aldous Huxley's "Finest Scent and Colour Organ" from _Brave New World_ but was decidedly less sinister.
Apple II AppleIIgs Fire Organ nerd