The Case for Working With Your Hands The NYTimes Magazine has a great article about the value, especially in today's world, of manual skills. The author recounts his own journey from cubicle farms to owning his own motorcycle repair shop and the sense of accomplishment, the passion about his work, and the satisfaction he receives from the problem solving involved in repair that such a manual trade gives a person. 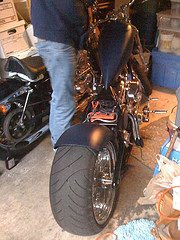 Working on the house at Lopez was my own excursion into a project requiring construction skills. It was great to watch my brothers Adam and Noah and our friend Joe work on the house and see the skills that they developed through their carpentry work. I was in awe of how they could literally rebuild and remodel a house using pencils, saws, nail guns, and their imaginations.

Likewise, it is fun to watch Noah work on his motorcyle.

Matthew B. Crawford, the author of the article, discusses how America's rush to drop shop classes in order to prepare tomorrow's workers for the information economy actually made workers with manual skills in a more enviable position:

The Princeton economist Alan Blinder argues that the crucial distinction in the emerging labor market is not between those with more or less education, but between those whose services can be delivered over a wire and those who must do their work in person or on site. The latter will find their livelihoods more secure against outsourcing to distant countries. As Blinder puts it, “You can’t hammer a nail over the Internet.” Nor can the Indians fix your car. Because they are in India.

Anne said…
It is amazing what people can build with their hands. I think perhaps the reason why I became interested in computers if my lack of aptitude with those finer details like building physical objects with my hands. Mack knows to keep a hammer out of my hands since it could only end in tears... mine.
July 1, 2009 at 6:55 PM