Yesterday I was looking through the Flickr Newton Pool when I came across an interesting image of a Connectix QuickCam hooked to an eMate 300, part of an imaginary security system a creative child assembled. This brought back memories of a combination Mac application and Newton package called RemoteCam. There is precious little information about this program; I did find some information about it at Newton AtMark, a Japanese site, but the link to the RemoteCam software was dead. I happened to have downloaded RemoteCam years ago after I first got my MessagePad 2100. Today I decided to give it a whirl.

First, I dusted off my PowerBook 3400c, which has the serial and ADB ports I needed to run the camera. Normally I run Rhapsody DR2 on this PowerBook, but it also has Mac OS 8.1 installed on it. 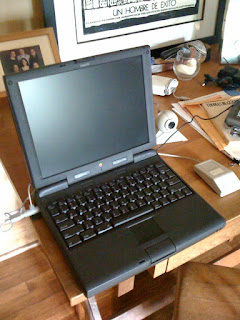 I set up a temporary network to get the RemoteCam application and the QuickCam installer from my PowerBook G4 to the 3400c. I already had an AirPort wireless network with one of the base stations acting as a WDS remote. I hooked a switch to that AirPort and was able to connect to the Public folder on my PowerBook G4 running OS X 10.5.8. 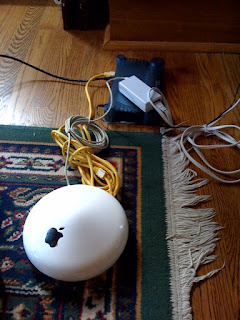 It took some googling, but I eventually tracked down the drivers needed for the QuickCam. I chose to install the slightly older 2.1.2 version as the site where I downloaded it mentioned that this version corrected issues with the PowerBook 3400. 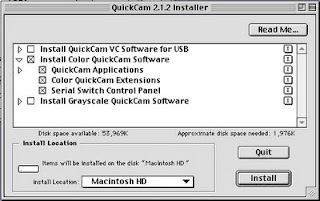 Once I had all the software installed, I went about getting the camera working. I could not get it to focus, and after a while I just got a scrambled image. I found a helpful page that taught me how to disassemble the QuickCam. When I opened it up out fell the SMD transistor mentioned on the page. Since I can't solder, I tried rubber banding the transistor back on the board. Success! I was able to get a good image, I freed up the lens and was able to focus the camera, and I was in business! 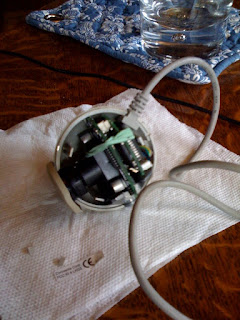 I opened the RemoteCam application on the 3400c.

I changed the window size to 320 X 240 and aimed the camera at myself. 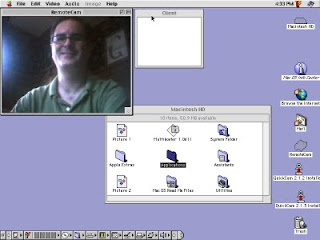 Finally, I configured both the Mac and Newton to look to the appropriate IP addresses so I could connect the Newton to the Mac. With the application running on the Mac, I opened RemoteCam on the Newton and initiated a connection. Success! I was streaming video wirelessly from the Mac to the Newton!

Unfortunately, Jolon Faichney's web site where he hosted RemoteCam is no longer online. RemoteCam is not on UNNA. If people are interested in trying this out for themselves, I can try to arrange to get this interesting program included on UNNA.
Mac Macintosh MessagePad Newton PowerBook QuickCam RemoteCam video

Josh Burker said…
The Read Me says RemoteCam should work on a MessagePad 2000 or 2100, but I think the considerably slower processor in the eMate would not be up to task.
August 14, 2009 at 9:14 AM

I wrote RemoteCam in 1998 as part of my Honours thesis.

I came across your site because I couldn't find a copy on my hard drive and thought I'd Google it.

Great to see it is still working after all these years! Your post was an enjoyable read. Great to see the screenshots.

As far as I am aware it was the first video conferencing software for mainstream handheld computers. Although the video is only one way.

The Newton has a serial port but the QuickCam uses a special asynchronous mode that the Newton doesn't support so unfortunately no video-in on the Newton.

Funnily enough I was searching for RemoteCam because I was trying to remember what the icon looked like. Thanks for posting it!

My main website now is http://jolon.org where I host some Bible software.