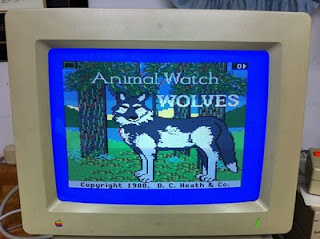 A few years back I got my hands on the Explore-a-Science Animal Watch: Wolves software for the Apple II series of computers. It was published in 1988 and distributed by D.C. Heath & Co. The Boston Museum of Science also contributed to the project. 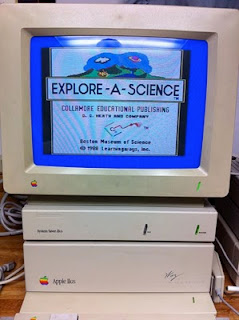 The software comes with a teacher's guide that details the workings of the software. Additionally, there are five copies of the student book that accompany the software. 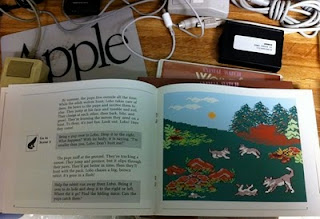 The story follows Lobo, a wolf, and the pack that he lives with. The idea is that the teacher or students would read through the text, which contextualizes what the student sees on the screen. In the gray text shown above there are suggestions for how the student might interact with the software. For example, in the first scene the book suggests that you try to find the other members of the wolf pack, find some water for the wolves, as well as some food. 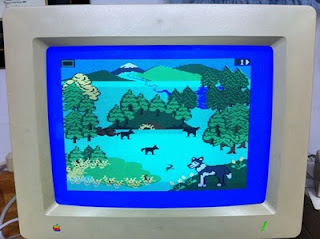 Students can use a mouse, a joystick, or the keyboard to move the cursor and to click and drag different parts of the scene to reveal characters, like the wolves and rabbit, or to expose more of the scene. For example, in the second scene students can move earth around to expose the inside of the wolves' den and see the pups inside. 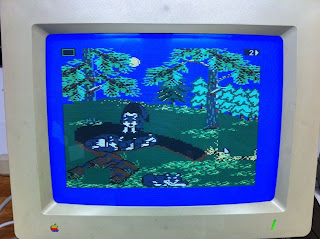 I couldn't get the mouse or joystick to work, though the keyboard did. The keyboard was awkward to use.
Students could add additional characters to the scene or even add different backgrounds. For example, one of the gray text areas suggests the student pick a pup from the character palette (accessible from the black box in the upper left corner of each screen) and add it to the scene. The adult wolf reacts to the pup being introduced, and the animated pup character goes into a submissive pose. 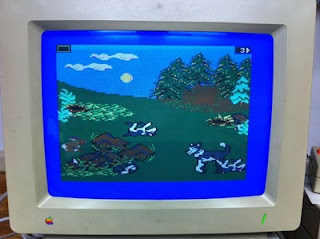 I liked how the software attempted to give a pretty accurate portrait of a wolf's life, its social interactions, and how the pack hunts to get food. Check out the deer the pack caught! 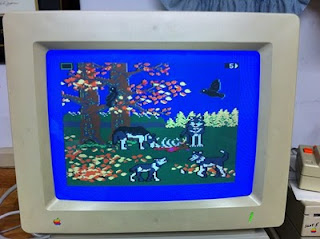 I like the idea of this software. While the story explains to the students how the wolves hunt, communicate, and reproduce, the software allows the students to explore the wolves' world. Students can add characters and watch them interact with other characters on the screen. They can pursue the tangents about wolves that interest them. Students can even save the scenes they create on the Student disk that the software uses to load the story. 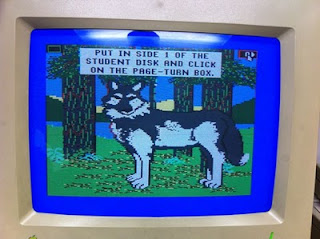 The ability to modify the scenes opens up the possibility of students creating their own scenes and stories. The scenes can be printed in black and white, color, or as outlines that students can color in. Pretty cool!
This software was an interesting trip down educational technology memory lane. I liked the interactivity as well as the cool graphics. I feel pretty lucky to have saved this software and manuals from the dumpster. 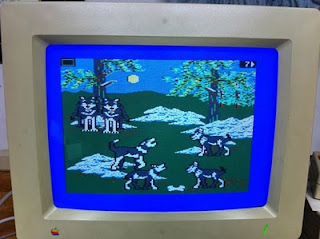