June 20, 2011
During the LEGO WeDo camp I ran after school let out I tried to entice the students, particularly the fourth and fifth graders, to explore using Scratch with the WeDo parts. I told them I was throwing them in the deep end of the pool, with no previous experience using Scratch. However, I provided them with six great starter projects that would get them up and going with the motor and sensors that by then they had figured out how to use in various models. However, they grew accustomed to having the LEGO models build instructions in front of them to give them a model to build and a purpose to the software. By this point we had exhausted what we could do with the basic WeDo set, spending 15 hours playing and working with it. I am excited that LEGO has developed and is accepting pre-orders for a supplemental WeDo Resource Kit, one that specifically provides parts for vehicles and four more models that students can build and adapt. I was a little disappointed at how camp was petering out but I did some research and found an awesome, compelling and hard fun project for the last day of camp.
Sub Rescue
After watching the video the students were reinvigorated to build LEGO and incorporate the motor and distance sensor. I showed them a way to mount the distance sensor vertically using a minimal number of LEGO. 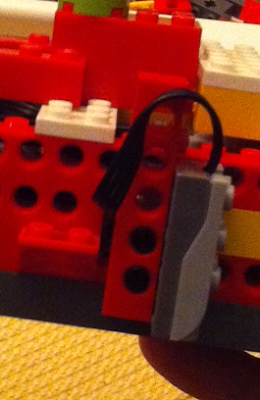 The students used the pre-built Scratch project to power their LEGO submarines, each of which was different in shape and build but each of which worked with the game. Of all the builds of the week, this was the one I was most excited about, and most proud of each of the students who chose to build their own submarine, the S.S. Papert, in order to rescue Scratch the cat. 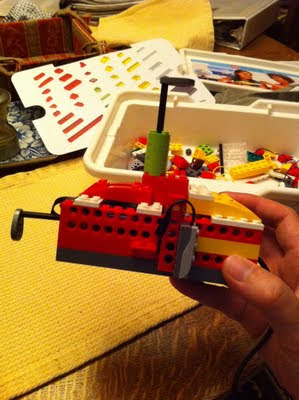 The only thing I would change about the Scratch project is the "make noise" component at the end, as it led to seeing how loud each student could scream. Again, the 15 hours and tiredness factor of WeDo camp. I would like to adapt the Scratch project to use the addition of the tilt sensor and have Scratch (the cat) tell the player a randomly generated key combination. The player would tilt the sub in the correct sequence of the key combination, the generated combination of left, right, back, and forward. The Scratch program would track the tilt sensor and would release the Scratch sprite should the player properly repeat the sequence.
I particularly enjoy this project and hope to use it in another classroom setting because of the intersection between the digital, in this case the Scratch game, and the physical: the LEGO, the sensors, the player holding and manipulating the model that he or she constructs. It's a great means of digital storytelling using software and hardware, and one I hope to explore in depth with fourth grade students next school year.
constructivist games Lego Papert programming Scratch video game WeDo