December 12, 2011
I had the good fortune of facilitating a session at the NYC Scratch Day, graciously hosted by Packer Intercollegiate Institute. I taught people how to use PicoBoards with their Scratch projects.

My friend Rob showed up and brought his son along. 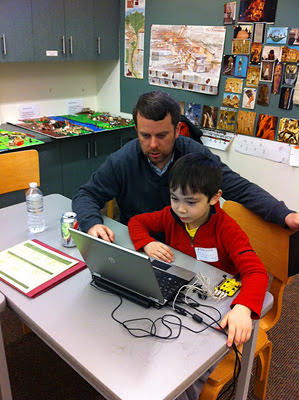 They developed a great Scratch PicoBoard project that used the alligator clips to create a closed circuit. Using the slider, T could make Scratch play a series of four piano chords. Here it is in action.

They demonstrated the project for Jaymes, who also facilitated a session on PicoBoards.

My success story for the day was working with a fifth grade girl to create her first PicoBoard project. She had previous experience using Scratch but had never before used a PicoBoard. She watched me demonstrate a few different projects that used the different sensors on the PicoBoard. She decided she wanted to make a project that used the slider, to control left and right movement of her sprite, and the button, to fire a projectile at another sprite. 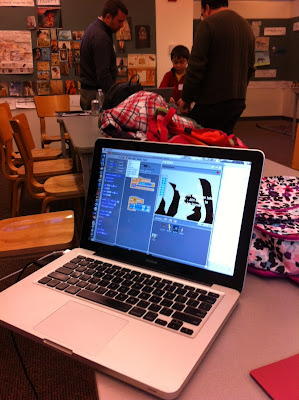 An hour and a half after starting, she had her project working the way she wanted it! She could move her character with the slider, and the button fired a projectile sprite that we borrowed from another Scratch project. She was going to add a PicoBoard to her Christmas list! 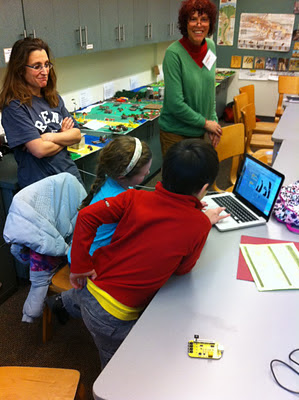 This was perhaps one of the best educational technology conferences I attended or at which I facilitated a project because there were more students there than adults! The students were all very excited to be there on a Sunday to learn more about Scratch! What a fun day!
PicoBoard Scratch ScratchBoard