November 07, 2013
I want to run a project with my younger students using Glowdoodle and LEDs to create a night sky. We can make points of light using the LEDs and capture them with Glowdoodle, then use a painting program like Paintbrush to draw lines connecting the points of light to create our own constellations.

I have built six Glow bottles which are great to use with Glowdoodle. However, I have more than six students in a class. I needed a quick and easy design to make a number of LED "flashlights" that could quickly turn on and off the LED so we could create points of light.

My prototype for the original electronic paintbrush used wires, which I had to trim and strip. 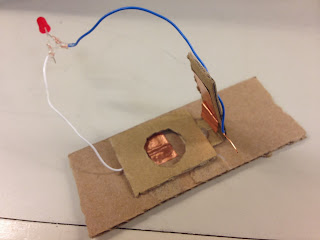 Additionally, I had to cut the battery holder from cardboard using an X-Acto knife. I needed a design that was more streamlined and scalable so I could crank out eighteen copies.

I started by trimming two pieces of cardboard per flashlight. One piece is approximately 8.5 cm long by 4 cm wide. The other piece is about 7 cm long by 2.5 cm wide.

I made sure I knew which polarity each lead on the LED was and used copper tape with conductive adhesive backing to secure the negative lead to the front of the cardboard. 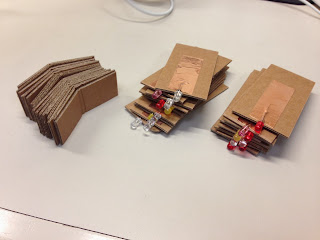 Next, I used Tinkercad to model a battery holder. I printed a bed's worth of these pieces on a Makerbot Replicator 2 3D printer. 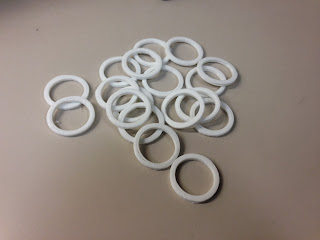 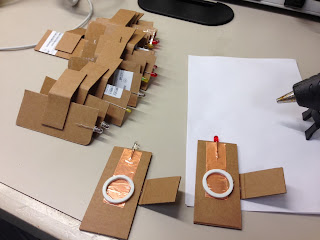 Finally, I cut two more strips of copper tape for the positive LED lead and the switch. 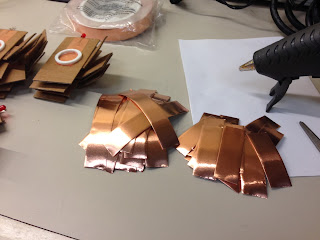 The shorter strip of copper tape covers the positive lead on the LED, and the longer piece wraps around the switch from the front to the back. 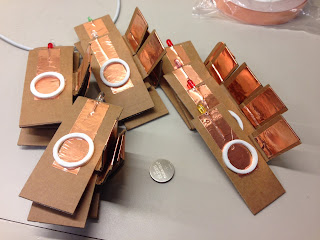 Once assembled you have a nice LED flashlight for Glowdoodling!