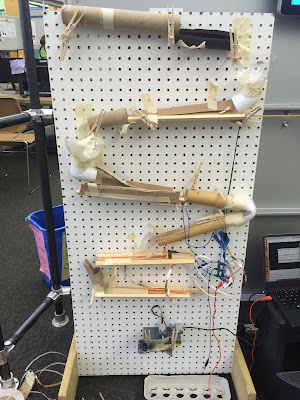 The next Marble Machine I helped build was also for a Westport Library staff development workshop. The two participants built a wonderful series of ramps, then I wired the ramps and programmed them to play part of "Pop Goes the Weasel."

This Marble Machine started with a paper towel tube that emptied onto a short foam ramp. They used the foam to slow the marble a bit. 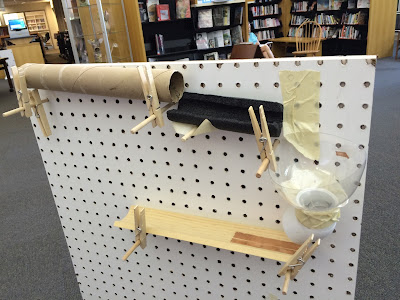 The marble dropped from the foam ramp into a funnel made from a two liter plastic bottle. Dropped at the correct angle, the marble would spin around in the funnel before dropping onto the wood ramp below it. I added additional copper tape as well as two cardboard bumpers. The wobble of the marble as it traveled down the ramp meant that it did not consistently contact both strips of copper tape. These bumpers tried to center the marble over both strips to close the circuit on the MaKey MaKey. 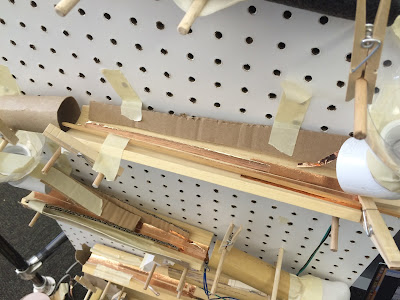 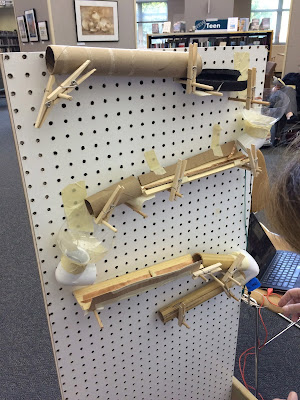 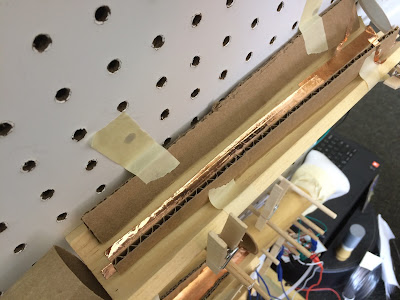 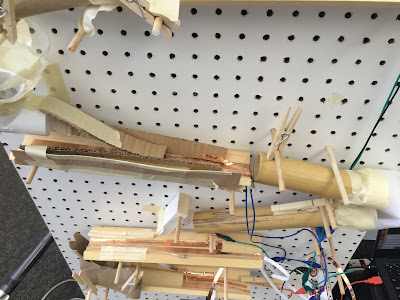 After emerging from the second bamboo tube, the marble struck a small wood bumper with cardboard padding to slow it down, then dropped onto a short wood ramp before dropping into a cardboard tube. This ramp used short pieces of rubber tubing to slow down the marble. 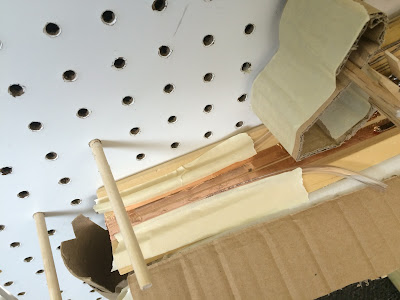 The final ramp was short and wired at the very end with copper tape. The marble dropped from this ramp into an egg carton on the floor. 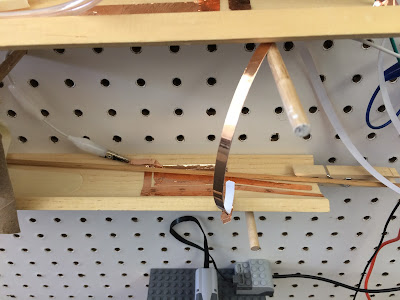 The final ramp used the MaKey MaKey and the copper tape to make Scratch play a note, then send a broadcast. Once this broadcast was received, Scratch played the last note and turned on the LEGO WeDo motor for .25 seconds. This made the weasel "pop." 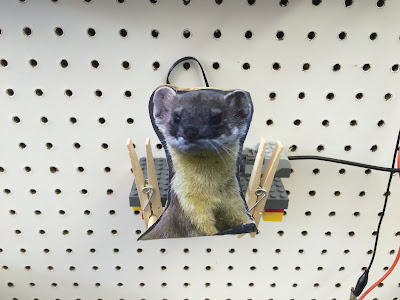 I learned a couple lessons while debugging this Musical Marble machine. First, a little ramp goes a long way. While the beginning of the Marble Machine should have a slight tilt to get the marble going, let momentum carry the marble through the machine. The rest of the ramps can be mostly flat, I believe. This would eliminate the need to build bumpers to slow the marble.

Fixing one thing on a Marble Machine breaks something else. No way to avoid it, you are going to have to iterate when you attempt to build a Musical Marble Machine.

Combining technologies, in this case Scratch, MaKey MaKey, and LEGO WeDo, in your bricolage increases the fun. The weasel popping at the end is hilarious and a great conclusion that reinforces the theme of this marble machine.

In addition to aluminum foil, the marble has quarter inch copper tape wound around it in one layer. Still, marble wobble down the ramps remains problematic when trying register key presses with the MaKey MaKey. Slower ramps would help with this problem.

A Marble Machine is not a consistent machine. It took twenty three takes to make the video of it working properly. Again, iteration is key, patience is a virtue.

I have a public workshop scheduled around the Marble Machine, and I have at least one more devious prompt up my sleeve. In the meantime, build your own and start constructing your knowledge of physics, engineering, music, mechanics, programming, circuitry, and more!
iteration Lego Makey Makey Marble Machine programming Scratch WeDo