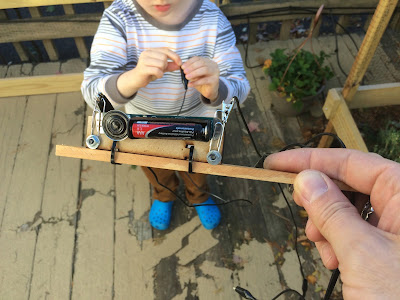 Jaymes Dec did me a favor and laser cut me a Drawdio Holder, which helps protect the Drawdio board since you do not have to strap the board itself to your wand, pencil, or jacket.

Lately my four year old son and I have been working on short projects that help him express himself through media as well as to test his theories of how the world works. We might use Play-Doh one day to stamp designs and shapes. Another day we might use his easel and a roll of paper with crayons, aluminum foil, conductive copper tape, and glue, along with Scratch and his XO laptop, to capture his observations and the sounds he heard on his first field trip.

As our container garden shuts down for the winter, I got an idea for a project to turn the container garden into an instrument using Jay Silver's Drawdio. I wondered if connecting the Drawdio directly to the soil would then let me play the plants? 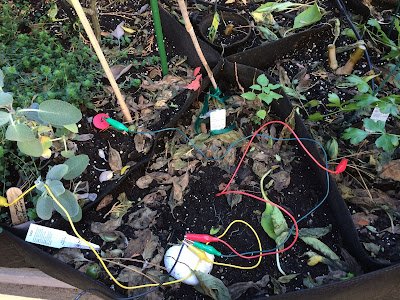 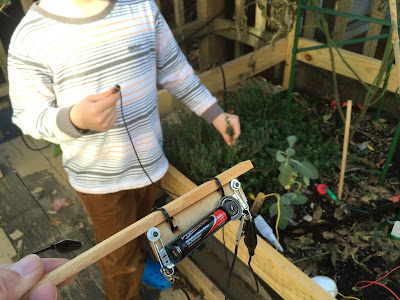 The Drawdio holder worked particularly well because the alligator clips could connect to the paper clips instead of the Drawdio board.

The most difficult part for these young musicians was making sure they were holding on to the metal part of the alligator clip. This was simplified by sliding the silicon cover back from the clip to expose more metal.

When our friends came over my son taught them how to play plant music, too.

Although they are too young to realize it, these boys are testing their theories about conductivity, resistance, pressure, and sound.

This project helped crystalize my understanding of Jay Silver's concept of the world as a construction set. By using his Drawdio, we were able to "hack" the container garden to play music in a way simple enough for three and four year olds to quickly understand. Different plants made different pitched sounds. Squeezing harder raised the tone. I particularly loved the stems from the pepper plants and basil I already cut down: touching them is like touching a button which produces a crazy sound! We entered into a different relationship with the container and the garden, which provided a home for the plants that nourished it, by performing a requiem, as it were, on the remaining plants. Touching the herbs, my son noted, released wonderful scents, adding to the sensory experience lacking from tapping on a glass screen.

Get outside before it is too cold, hack your world and make it do whimsical, beautiful things!
constructionist Drawdio Makey Makey nature Scratch XO