The most amazing work to grow out of the Logo after school club I facilitated this school year in a Bridgeport charter school is the willingness of the students to iterate on the designs they program for the LogoTurtle to draw. I have been asking anyone who will look at the art and listen, "How many times do you see a student willing to work on a math problem that he or she thinks the solution to is 'wrong,' and will go back on his or her own four, five, even six times to work on until he or she reaches a perfect 'solution'?"

Every time I work with the LogoTurtle with these students on a design that they generate, they inevitably find a fault in the drawing. However, instead of looking at the fault as a problem of the LogoTurtle that could be solved with a better "tool," they willingly undertake an exploration of the math or engineering that might go into "improving" the design and capturing the perfection for which the student is striving. This is exactly the "mucking around" Brian Silverman imagined might happen with programming the LogoTurtle! 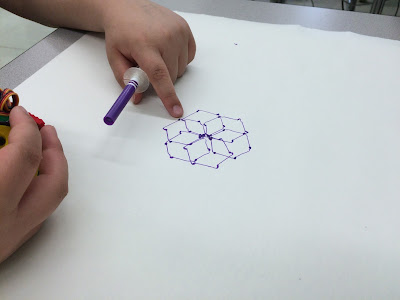 A student who dropped out of Logo club returned last week and worked with my constant club member to catch up on five months work! After starting her on Turtle Blocks, she quickly built a small tool that could be used to make a more complex design. 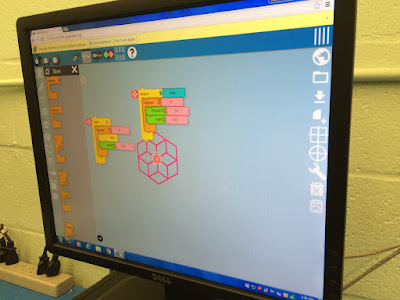 The other student helped her translate the block programming into LogoTurtle text. 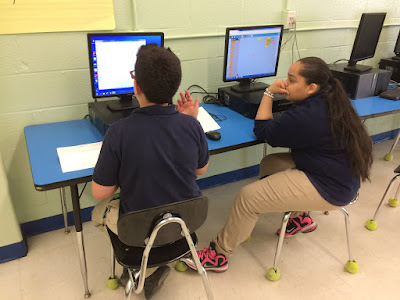 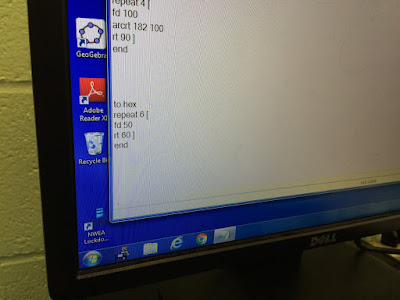 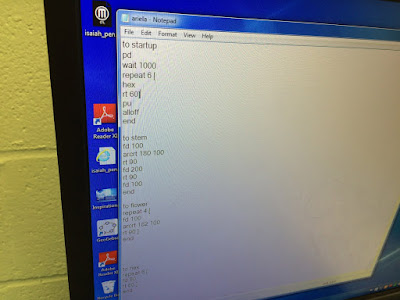 Both students were unhappy with the "lash" and the dot that happened when the LogoTurtle turned: the pen moves slightly from its ray and the dot happens when the ink seeps into the paper. We tried scaling the design up 50% to see if that helped with the lash. 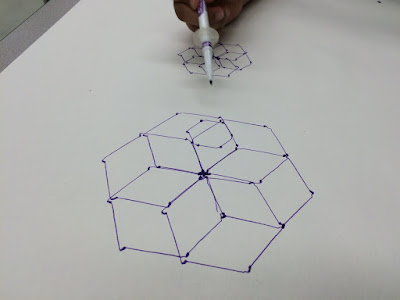 The longer ray did help a little, but they still did not like the dot at the turns. I suggested lifting the pen before the LogoTurtle turned then putting it back down after it turns. 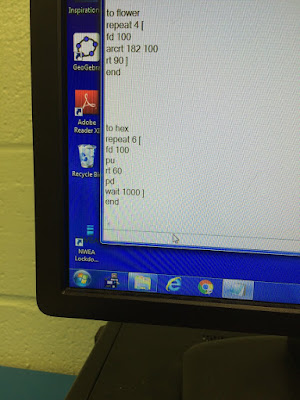 The results were stunning! 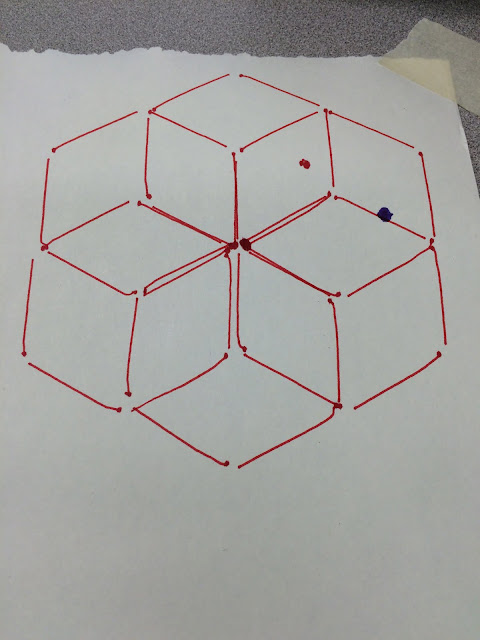 Loading the procedure on a different LogoTurtle meant we needed to muck with the math. 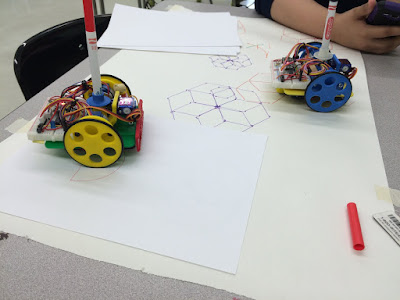 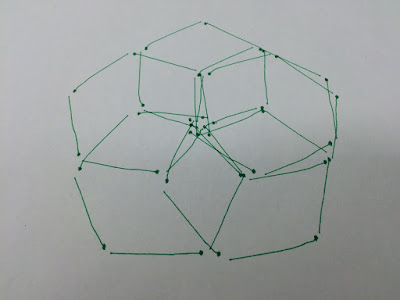 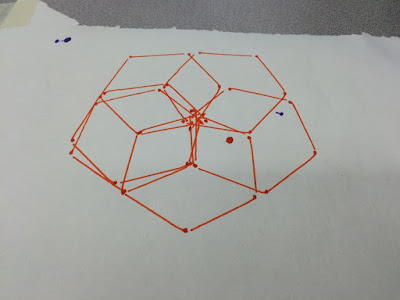 It was fascinating to see this girl, who had some experience with Logo programming in Turtle Blocks, approach the LogoTurtle angle and degree problem the same way I have seen other students, determined to repeat a design from the screen and willing to muck with the math to program and create an approximation of perfection. 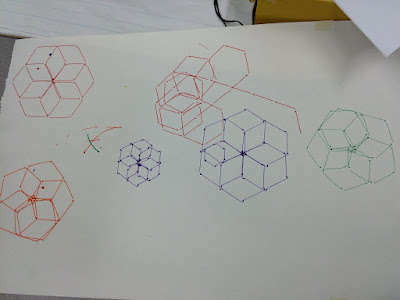 The same tenacity played out this week as the long-time student worked on a flower design that he developed a couple weeks ago. He wondered if he could use the pen up and wait commands so he could change pen colors during the drawing. He was able to easily accomplish this goal but swapping pens produced a gap in the drawing despite using the wait command. He could not tolerate this gap! 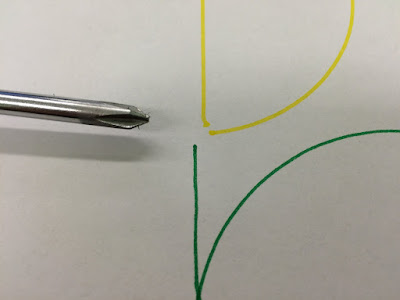 We decided if we could get the LogoTurtle to draw a little line towards the stem we would be happy with the design. This led to a careful observation of the state in which the turtle ends the procedure so we knew what additional commands we would have to give it. It turns out a simple "back 5" was the solution! 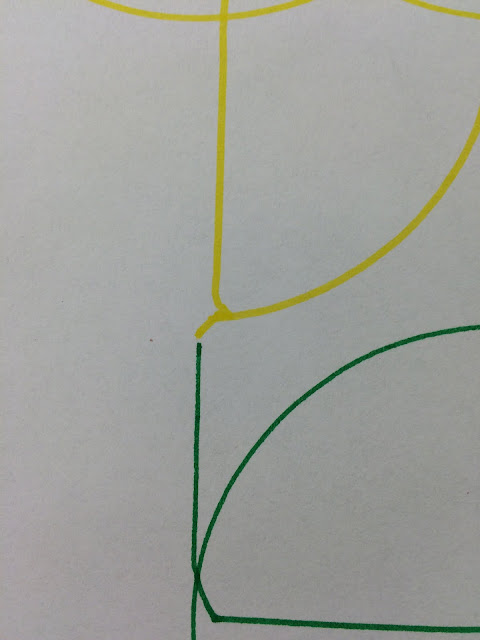 He ran the procedure a second time with the exact same results! 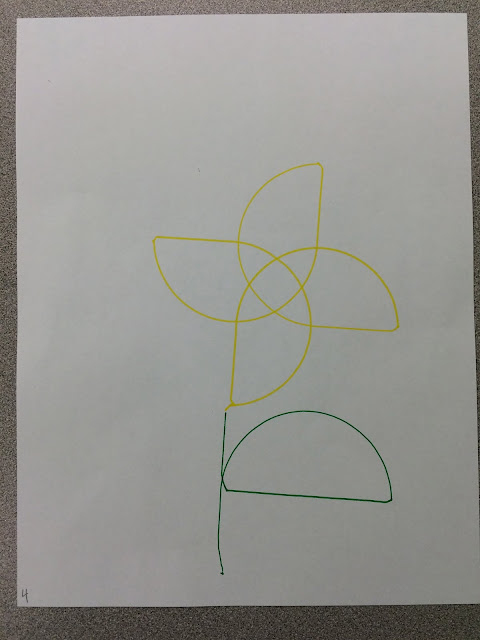 This student has learned much about angles, degrees, debugging, design, and iteration. I have done very little direct instruction besides helping him with the LogoTurtle syntax. His desire to iterate on the mathematics required of the design is motivated by his own aesthetic choices and sensibilities, something my graduate work uncovered the importance of in any learning situation. I am extremely proud of this student and the progress he made during the course of this club!
art Logo LogoTurtle mathematics mucking programming

drpresident said…
I did Logo programming with students many years ago, when I taught middle school CS. Having LegoTurtles would have made the experience so much more interesting and accessible to the children. I think that combining programming (virtual) with the physical is very powerful for learning.
May 27, 2016 at 6:26 AM

Josh Burker said…
Awesome. As you can see, working with the LogoTurtle has had a profound effect on these students, who typically have very little exposure to STEAM in their charter school. Their understanding of angles and degrees in particular puts them far ahead of their peers, I believe.
May 27, 2016 at 9:26 AM