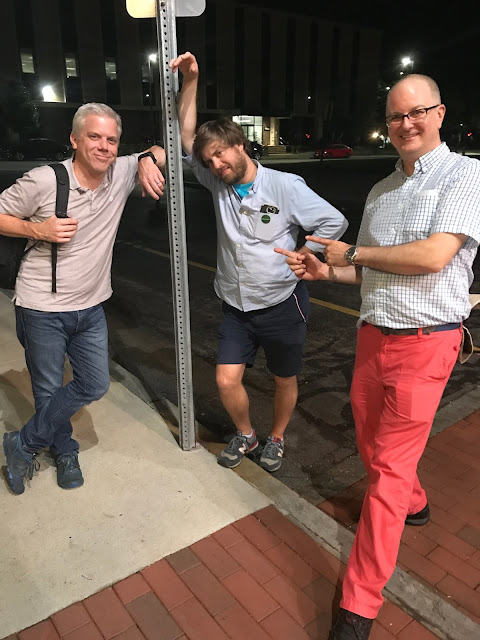 Constructing Modern Knowledge at 10! With this milestone came my elevation to faculty status, meaning I was charged with circulating and asking questions of participants to get them thinking through the challenges they created for themselves and to lend my technical skills and teach others these skills. I also sneaked in a couple personal projects!

How do you make it light up? These teachers were interested in paper circuits. I pointed them to the excellent Chibitronics site and the circuit templates. Then I left them to work on building example circuits and to dream up their own project around paper circuits. Gary Stager always emphasizes "less us, more them," so I sought to avoid telling them what to do with the paper circuits they constructed.

They decided to build a light up display to track progress in a game of "light up hangman" in the classroom. I asked them how they were going to make it light up. They knew how to build paper circuits, so they wanted to scale up that skill. I had no idea how large they decided to build it, but they had plenty of room in the large conference area! 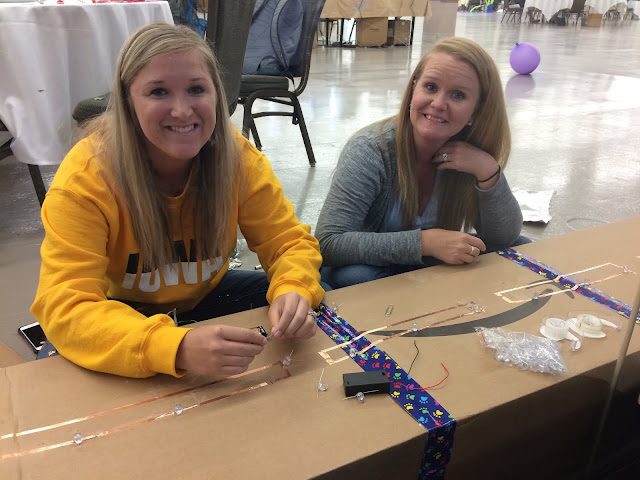 After laying out their circuit and testing it they found that they needed to learn to solder to improve the connections between the copper tape and the LEDs. Just in time learning! 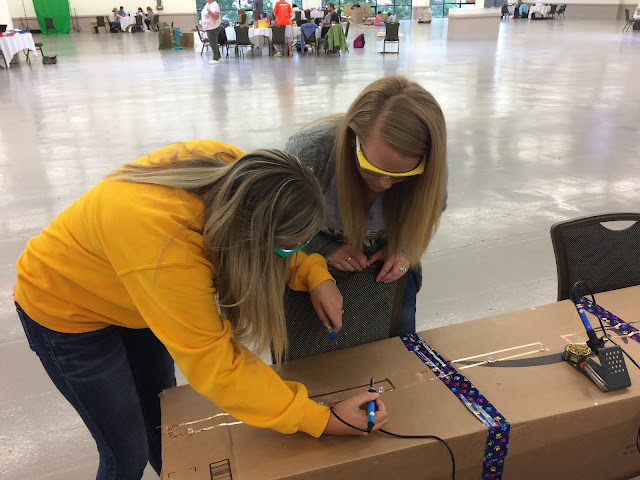 With many LEDs in their circuits, they needed to power it with 9 volt batteries. They designed beautiful holders that also functioned as power switches. The battery is held securely suspended above the circuit until it is time to turn on the LEDs by pushing it to the bottom of the holder, making contact with the paper circuit. 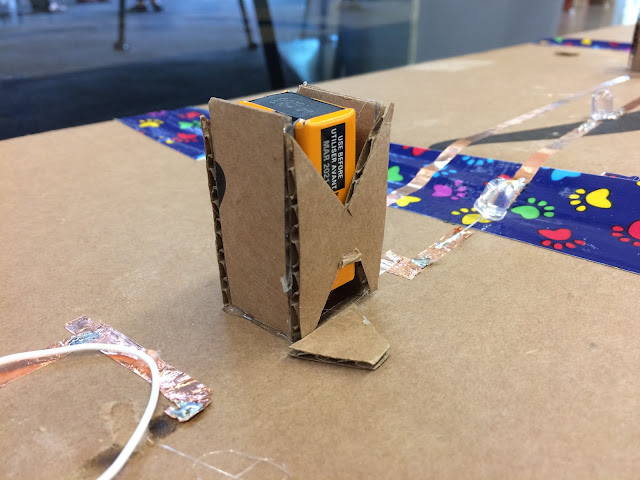 In the end they had to replace much of the paper circuitry with wire to improve the conductivity. In hindsight a parallel circuit, instead of a series circuit, would have been an improvement, too.

However, their efforts paid off!! 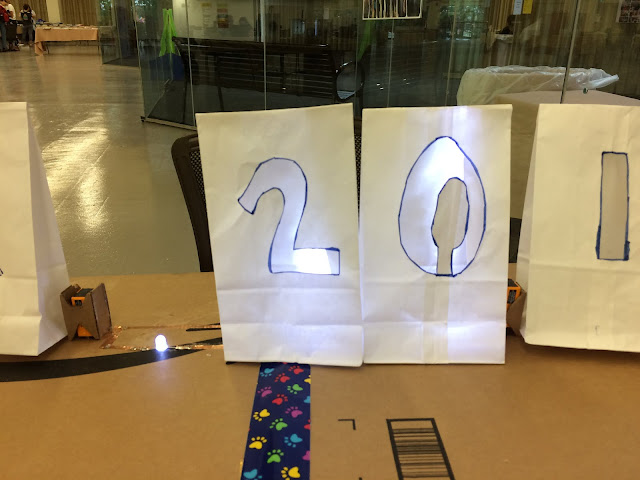 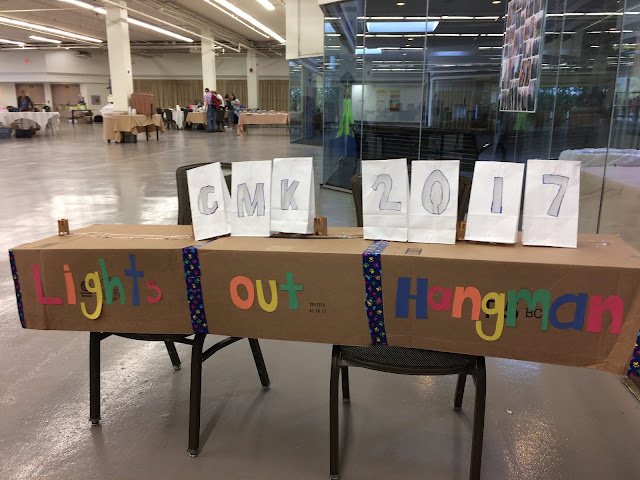 These teachers were prepared to return to the classroom and teach their students to build both paper and wire circuits! I look forward to seeing their work as they refine and develop their skills further.

How do you create new parts for a machine that does not yet exist? This group was thirsty and they liked their canned beverages cold. They were also eager new users of 3D design and printing. They decided to build a can cooler that used LEGO and 3D printed gears that they designed themselves in Tinkercad and that interfaced with LEGO and the other materials they used. They also used Play-Doh as a building material! 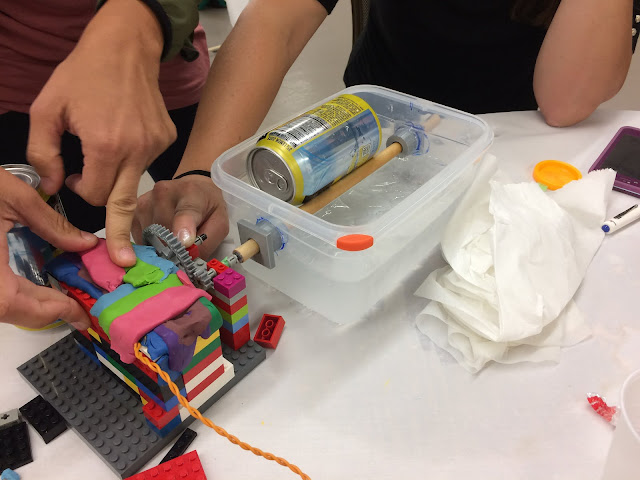 I helped them with the 3D printers we used at CMK. I suggested adding salt to the water bath to make it extra cold, and I helped by giving a team member a lift to the grocery store for soda. In the end their sodas were nice and cold and popular with the crowd! 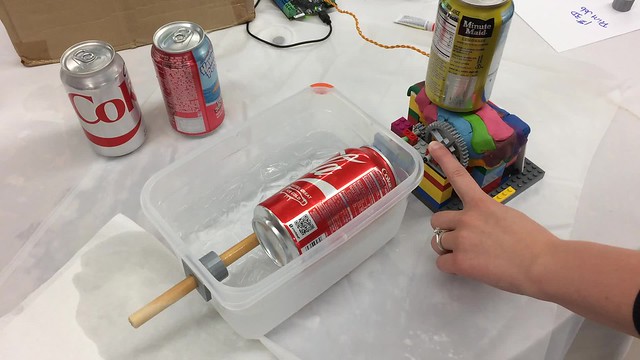 Lending Skills and Teaching Others

I helped this group devise a way to make a pinwheel connect to a Makey Makey to aid in their quest of capturing the wind. Using two parallel copper tape "fingers" and patches of copper tape on the back of the pinwheel that bridged the two fingers, they were able to program Scratch to react when wind blew the pinwheel. 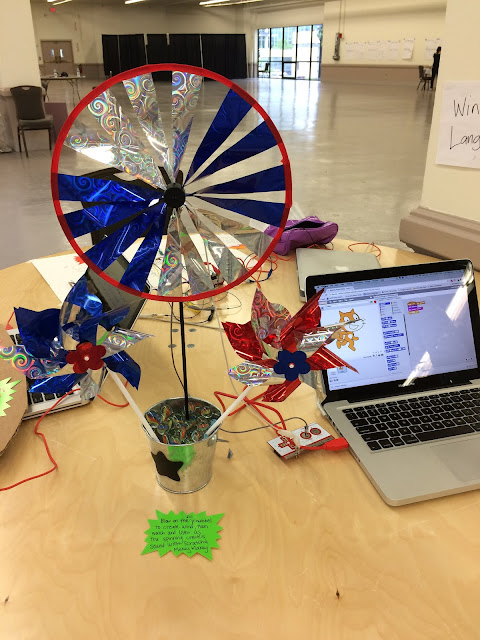 I was also able to help a group with 3D printing and using the Makey Makey to build a "physical video game." You maneuvered a conductive princess through the cardboard and copper tape maze to battle a big Boss and hopefully defeat the game! 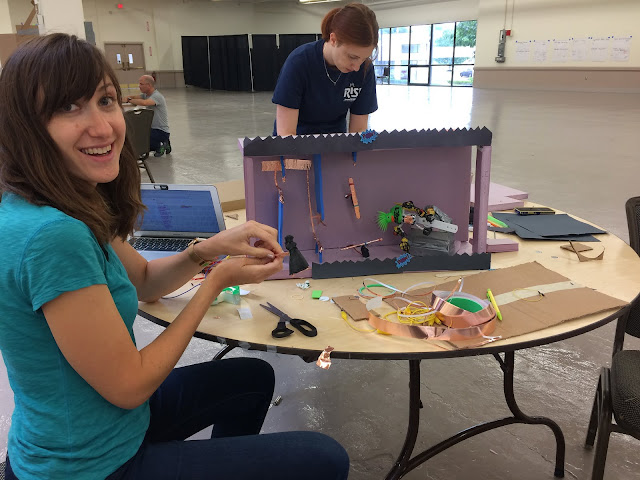 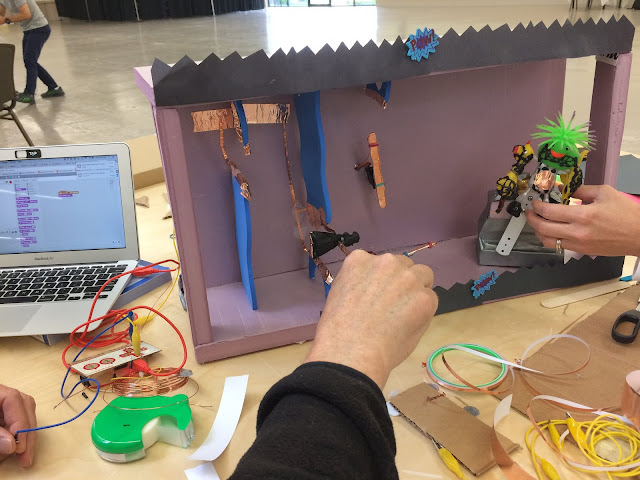 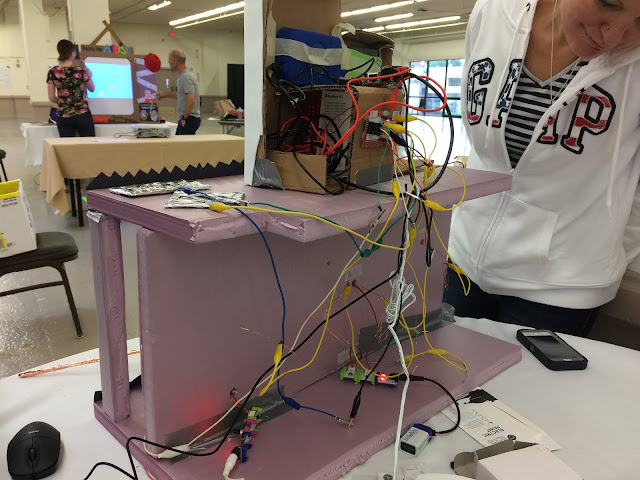 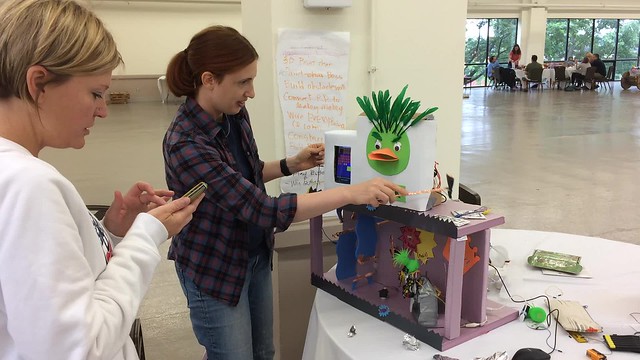 Projects I Worked On

I was able to build a LightLogo clock with Brian Silverman. It uses a 24 LED neopixel ring and a real time clock in addition to a Metro Mini to tell the time using a visual method that Brian and Artemis Papert devised. When I got home I added a laser cut wood backing to the NeoPixel ring and a 3D printed base. 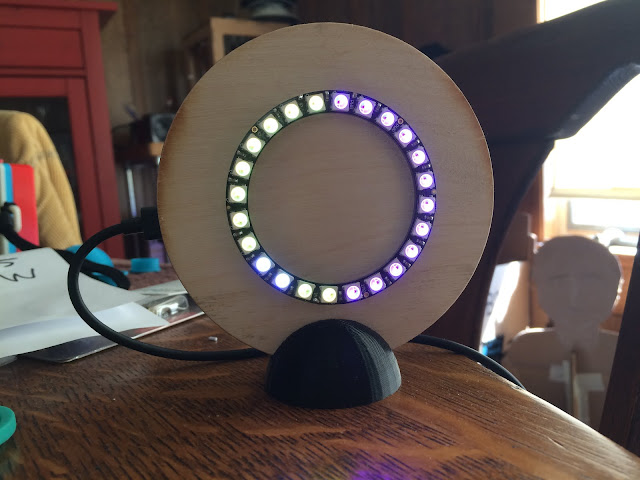 I also managed to build a geodesic dome with Sara. I used directions from the Farallones Scrapbook to assemble dowels, pieces of garden hose, and hardware into a dome large enough for me and a second person! 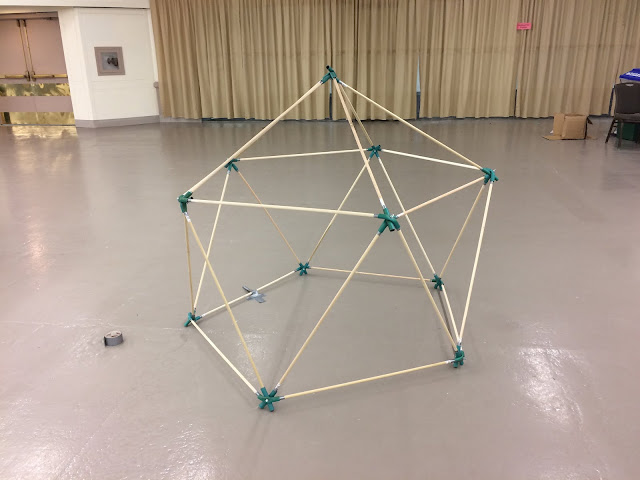 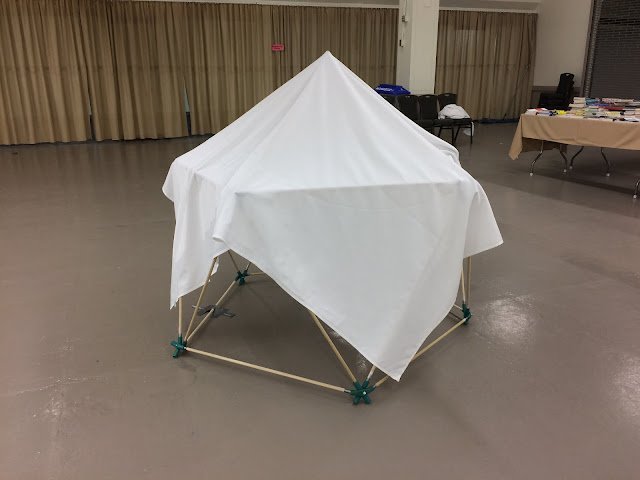 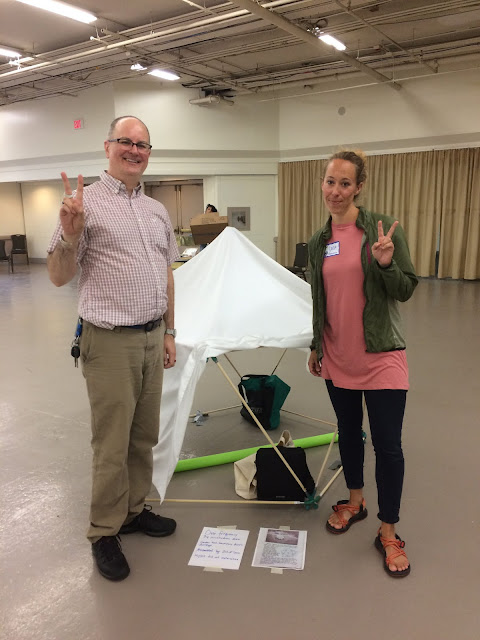 Smaller was better. Even though the numbers of participants were way down from last year, the smaller crowd meant better access to materials, the faculty, and made for a less frantic environment, truthfully.

Getting a glimpse of the crafting and cross-discipline work at The Haystack Mountain School of Crafts was very inspiring. I appreciated their outreach to the rural community they call home to improve equitable access to fabrication machines and materials. I also love their blending of craft and technology in many projects and approaches. 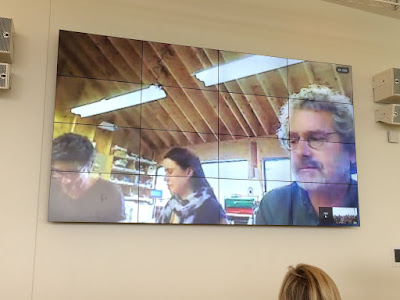 Finally, though Gary warned this might be the last CMK, he and Sylvia were grinning from ear to ear at the end. 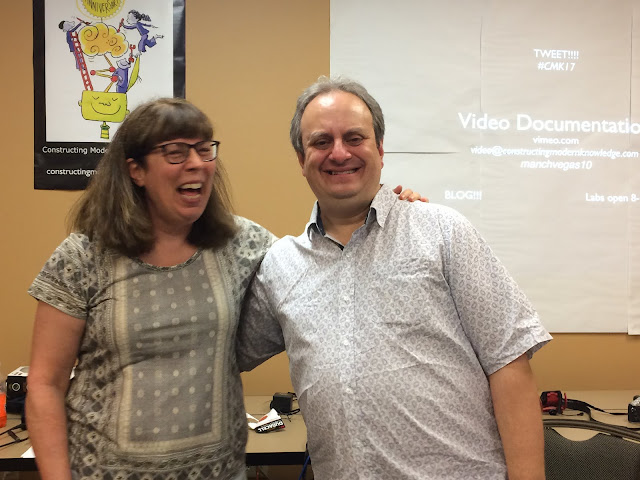