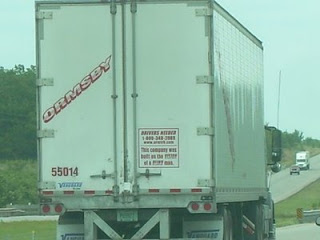 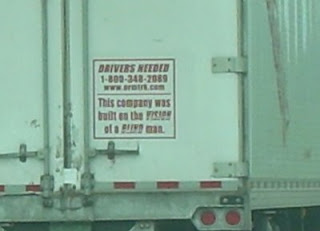 There was so little so see on this leg of the journey that we did not really take any photos. No cool roadside attractions, no historical markers, nothing. To keep the miles moving Meg and I read to each other from Short Bus, getting through four chapters. We also saw the sign above on a semi truck, "This company was built on the vision of a blind man," which I found to be pretty inspiring and fitting with Mr. Mooney's tale. So I think this post is going to be a little discussion on the powerful message of this book.

It seems that every time Meg or I read to one another from this book that either one or both of us end up in tears by the end of the chapter. It is that touching of a book. The tears come from the cruel way society treats individuals with learning differences or different physical abilities, but they also come from the stories of how the individuals Jonathan Mooney meets overcome or transcend what society sees as limitations.

Yesterday's readings made me think about the Autistic young woman with whom I had a conversation at the Grand Canyon. She was very inquisitive and asked me many questions related to geography. I was happy to oblige her questioning. I have found that after working with students on the Autism Spectrum that I can pretty quickly pick up when an individual is Autistic and have an appropriate conversation with her or him. In this case I was more than happy to talk about Maine, the Atlantic Ocean, New Hampshire, and our respective experiences in these places. However, as the conversation continued I could sense her parents' discomfort: they said, "Oh, she's the question woman," to me as a way to explain the incessant questioning. I said I did not mind, but the parents were clearly a little exasperated (there are a lot of people to talk to at the Grand Canyon, after all) and perhaps even a little embarrassed.

Talking with Meg about the experience, we compared it to some of Jonathan Mooney's experiences on the short bus. Typical people might not have treated the young woman as well, recognizing that she was different and fixating on her differences, rather than the similarities. They might have thought her questions about Maine, being asked from Arizona, were "off topic" or such non sequiturs as to not warrant a response. However, I enjoy these seemingly random conversations because they help reveal the interests of the Autistic individual, the "thing" that they are "really into" and the topic with which you can easily engage the individual. Oftentimes when I first meet an Autistic person I will ask her or his parents, or the student her- or himself, "What are you into? What's your thing?" Making this connection show you value the person as an individual, not as a curiosity.

So next time a person comes up to you asking questions about your Maine shirt, oblige her or him: you might just learn something new about the world and yourself.