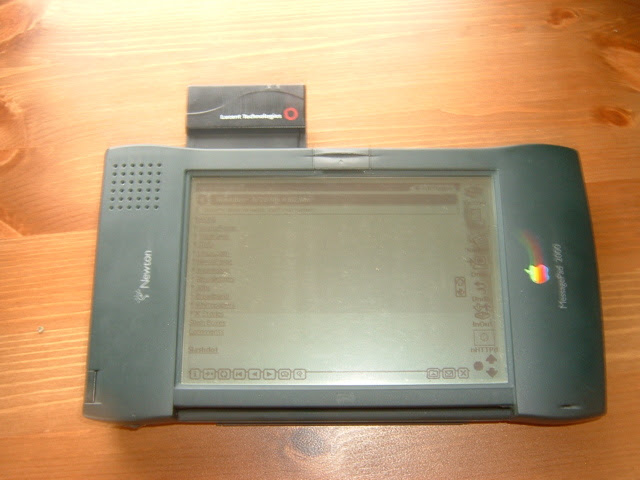 Last Christmas I took my MessagePad 2100 on the road with me to Maine as a means of checking my email and scraping RSS feeds. Normally I use my MessagePad as an NPDS server. I thought the Newton would be an ideal traveling partner. I was hampered by Hiroshi's unwillingness to register his 802.11b driver.

Around the same time I started using the Newton heavily for taking Notes. I installed Paul Guyot's alt.rec and changed my Newton's handwriting recognition from cursive to printing, which is required by alt.rec.

Subsequently, I noticed a strange "stutter" in Notes when I used the on-screen keyboard: when I typed letters, more often then not the Newton would keep the keyboard's key depressed and replay the "keydown" sound, but not type extra characters. However, it made Notes pretty much unusable on my NPDS server if I were trying to modify index.html, for example.

Today I tried to modify my NPDS server's home page and the stutter became unbearable. I worried about my PCMCIA flash memory card going bad. I tried to remember what I had monkeyed with last on the MessagePad. I froze alt.rec and rebooted, then changed the handwriting recognition back to cursive. I opened Notes and the on-screen keyboard and banged out my normal type-testing phrase: "The quick brown fox jumps over the lazy dog." No stutter. Problem solved.
alt.rec handwriting-recognition hwr Newton Paul Guyot