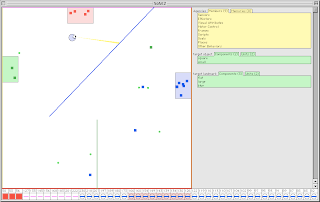 While poking around the Intertubes for information about AppleWorks GS, I happened upon Bob Hearn's old webpage at MIT. Bob Hearn was one of the original programmers of the Apple II program that would become AppleWorks, later renamed ClarisWorks before becoming AppleWorks again.

Dr. Hearn has available on his MIT page an application he wrote to illustrate some of the concepts in his Ph.D. thesis, "Building Grounded Abstractions for Artificial Intelligence Programming." Influenced by Marvin Minsky's "The Society of Mind," Dr. Hearn was concerned with taking the ideas from this seminal work and applying them to constructing an Artificial Intelligence system. From his thesis' abstract:

As a demonstration of these abstractions, I have implemented a simulator for “creatures” controlled by a network of abstract units. The creatures exist in a simple 2D world, and exhibit behaviors such as catching mobile prey and sorting colored blocks into matching boxes. This program demonstrates that it is possible to build systems that can interact effectively with a dynamic physical environment, yet use symbolic representations to control aspects of their behavior.

Dr. Hearn makes available the Macintosh application that he wrote as part of his thesis. Since I am a sucker for old, strange Macintosh applications I downloaded and ran it in Classic on my PowerBook. While Mr. Hearn does not provide directions, reading the abstract and having a sense of Minsky's Society of Mind theory, one can quickly understand the action that unfolds as the simulation runs.
Bob Hearn Macintosh Minsky Simulation Society of Mind

BTDavey said…
I cannot help but think that the screen images are very reminiscent of working with Papert's Turtle software. I do not have an old enough Mac hanging around anymore so cannot enjoy this directly but enjoyed your comments and thoughts.
September 19, 2007 at 4:57 PM

Josh Burker said…
Good point, Brad. However, the most immediate difference between a Logo environment and Bob Hearn's artificial intelligence environment is that in Mr. Hearn's program the user does not intervene at all. As Papert learned, as we did, the strength of Logo as a learning environment is that it is engaging. Mr. Hearn's AI simulation is very interesting, but I would argue it is not as engaging as Logo.
September 19, 2007 at 5:07 PM