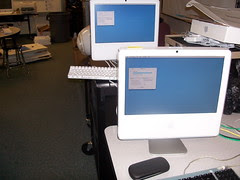 It is back to school time, and every year brings an update of computers at the school where I work. This year I deployed a custom-built OS X 10.4.10 Intel image on 34 iMac 17" computers. Used in conjunction with Workgroup Manager and Radmind, along with some simple shell scripts, it makes administering Macs in an elementary school (or any widespread deployment) very, very easy.

Of course I cannot take a look at every nook and cranny of every application before deploying a new build, but I have a whole school of eager testers to do that for me, and the tools that make it easy for me to make subtle updates that fix what is broken.

I deployed five of these new iMacs in the Library yesterday. I watched a bunch of fourth and fifth grade girls using them during recess, playing with KidPix Deluxe 4. I asked them if everything was working: they pointed out that the Stamps were not working, a QuickTime issue.

It was great to involve these student end-users in the troubleshooting process and seeing which applications they value the most. I have also installed Google Earth and Scratch on the Library Macs, so it will be interesting to see if they use these apps as well.