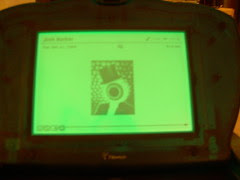 Inspired by a Seymour Papert video and a post on MAKE's blog in which Phillip Torrone tries to cobble together an eMate into an approximation of the One Laptop Per Child's XO laptop for under $100, I wrote a paper about the OLPC and the eMate 300. Papert argued in the video that the hardware does not matter: it is the exposure to new ideas, technology, and communication possibilities that matters. I take the side that the hardware does matter. Read the paper if you are interested. I excerpt below the part I wrote about making an eMate into a less than $100 OLPC-type laptop, since Phillip Torrone dropped the ball and never completed the project.

This leaves us with Philip Torrone's unfinished $100 laptop project, which he seems to have conceived as he ran out the door and was never picked up again. As I have a clear fascination with the eMate, an interest in the Newton OS, and a newly-purchased eMate of my own, I thought I would devote this final section to briefly documenting the tools available to turn the eMate into something of a $100 laptop with modern capabilities. The Newton OS is a proprietary, closed-source operating system, a hindrance to many of the efforts to keep the platform viable eight years after it was canceled. The Newton Internet Enabler, for instance, is limited in its abilities on the modern internet. However, the resourcefulness and ingenuity of the user community has managed to coax the platform along and keep it relevant.

The eMate 300, as it shipped, had 1Mbyte of DRAM for system use as well as 3Mbytes of Flash memory for storing packages and user data. The low amount of available system memory, or heap, can present a problem when trying to use the eMate for web browsing. For this reason, I would also recommend two utilities.

Heap Magic, which does "garbage collection" on the heap and helps to free up memory.
Freeze Utilities helps conserve heap because all packages, or applications, loaded on the Newton device require some system heap whether they are running or not. Freezing the package makes it use less system heap.

It would appear, then, that the eMate 300 can do many of the same things that the OLPC will be able to do, though not nearly as fast. The open-standards on which the OLPC is based will help the OLPC to remain viable in years to come as the users will be able to get "under the hood" to make the changes necessary to keep the hardware and software relevant for their use.