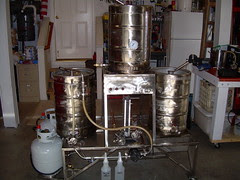 I had the opportunity, at last, to join Robb Wick, an art teacher at the high school, when he brewed a batch of "Pond Scum," a Mirror Pond-style Pale ale. I had participated in various brewing efforts in the past, from a failed batch inspired by a Shakespeare class in high school through quaffing the fine ales my brother Mark turns out from time to time back in Rhode Island. No previous brewing experience, however, prepared me for the absolute garage science Robb has going in his brewing setup.

While the rig used to be set up as a gravity system, it was impossibly tall. Welded by Grant Bower, also at the high school, the new system had a nice electric pump to move boiling water from the top tank around as needed, as well as to pump the brew that has been boiled from the grain to the tank on the right, where the brew is boiled again, then has the yeast added. From there it is pumped into a fermentation tank, where it grows its magic.

It was awesome to hang out with Robb, Ryan, Grant, and Gary. I learned much more about the brewing process and gained a deeper respect for Robb's talents. Prost!

Robb talked about how hop prices have skyrocketed for many reasons, including crop failure in Europe last year and a warehouse fire that destroyed a large amount of stock. Interestingly, on the drive to work this morning NPR ran a story about hop farmers in Oregon that discussed just these exact economic trend.

Check out the Flickr set, accessible from the photo above or from this link! I was only able to stay through half of the total process, unfortunately.