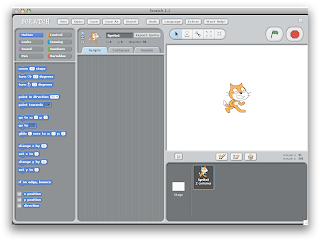 I wrote a bit about trying to interest students in Scratch, noting that while students certainly enjoyed the graphics-editing part of the program, as well as playing some of the pre-built games, like a Pac-Man clone, very few were making the leap into programming using Scratch.

All that changed, however, once I asked a fifth grade girl whether she had ever used Scratch. She was aimlessly drawing in KidPix Deluxe, so I thought she might appreciate a little bit of a challenge. I started by explaining that Scratch was cool because it had a rich drawing part to it, but that you could also make the drawings do different things. I showed her the "Breakdancing" project that comes with Scratch, which she thought was pretty funny. I also showed her how to mount the server on the library computers so she could save her work.

Fast forward a couple of weeks and I find that her friends, too, have developed an interest in programming using Scratch. One girl had a sprite, or character, of which she had customized the appearance. I asked her what she wanted to do with the character, and she said it would be cool if she could move it around. I showed her that by using the Control programming blocks she could make the character move according to the keys she assigned. We struggled a little bit with reversing the direction of the character, but we got it working. She in turn taught her friend how to make a similar character in a different project move.

The girls then moved on to recording short songs that they sang. Now their character will sing short ditties when clicked!

I think that the gradual success of getting students to program in Scratch is encouraging. I am particularly interested in the fact that it is girls who are making the most of the programming environment. The programs they create encourage collaboration, and the process by which they are teaching one another the steps, like mounting the server or controlling the character, also reward the students' collaboration. It will be interesting to see where their Scratch programs go next and whether Scratch holds their fickle interest.
collaboration education programming Scratch

Anne said…
That's really cool that the girls are showing interest in the programming. Mack and I were discussing how one of his teachers (a female) talks about how "sexist" the field can be. How, since it's a male dominated field guys tend to generally b.s. and then the women sometimes think of them being sexist. Shelley (Mack's teacher) has had many a women cry to her about tech/programming people being sexist. I say they just aren't used to be around women.

Josh Burker said…
Thanks for your comments!

I think the important point here is that the girls are not necessarily using Scratch to "program," but rather are using the application as an excuse or reason to collaborate. They record the sound effects for their characters together, they help each other figure out the program, and they share their knowledge about programming among themselves. In the process they do learn to program, but I think that the girls find the collaborative possibilities and opportunities to be engaging, not the software itself.
November 7, 2007 at 5:08 PM

Sean McManus said…
It's interesting that art provided a way in to programming here, albeit informally. Over time, hopefully we'll start to see programming supporting other subjects on the curriculum (as English and maths do) rather than being fenced off into its own subject. I agree that the teamwork that Scratch projects can engender (especially in the new Scratch 2.0 with web collaboration) is important too.
September 13, 2013 at 6:37 AM