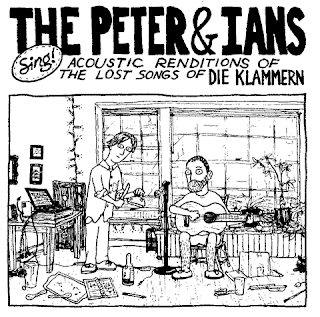 Not since Ergo Phizmiz's "acoustic" version of The Velvet Underground's seminal "White Light/White Heat" (which, incidentally and unfortunately, no longer appears available on the intertubes) have I gotten so excited about a so-called "acoustic" album as I am about The Peter and Ians "Sing! Acoustic Renditions of the Lost Songs of Die Klammern." This EP has been on constant rotation on the CD player and the iPod and I find myself sometimes waking up with one or another of the songs jammed in my head. I am sure this would worry my friend Peter, who with his brother Ian make up this eponymous band. The comparison to Ergo Phizmiz is not that far off: not only do The Peter & Ians claim VU as an early influence, the eclectic collection of instruments on their album rivals Ergo Phizmiz's:

All of these instruments can be found on Peter's wonderful cover art, pictured above. 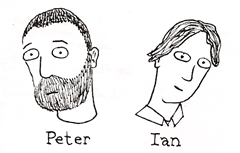 Peter played the album for me back in October when I went down to Portland to battle the brothers on Ian's Wii. I dug the eclectic sounds of the songs and the vocal stylings: one song, "Water," reminded me in particular of Alexander "Skip" Spence's sound on his haunting Oar album. So I was especially psyched when he visited in December and brought me a copy of the EP. I got so hooked on it that I asked The Peter & Ians if I could interview them about the album and their music. They obliged, and since they now live in Portland we used the intarweb to send a list of questions that Meg and I generated.

Tell me about Die Klammern

Klammern is an old family name from Luxembourg which we chose in honor of our great-grandfather who was a tuba maker there. In old diaries we've inherited we also found out that he was a religious man (he liked Jesus) and organized tuba concerts on Easter and Xmas and the like. He described one Easter tuba concert where he and his buddies got wasted and started stuffing sausages down his tuba, like 50 pounds of this shit, until it finally squirted out the mouthpiece and they were able to use the tuba valves as a sort of sausage dispenser: just press one down and a little sausage nugget would squirt out. He said if you pressed the first valve, the sausage would be bratwurst, but by pressing the third valve, more of a liverwurst would emerge. He didn't say what the second valve yielded. Anyway, when our present day family decided to carry on the music making tradition of our great-grandfather, we felt we should honor him by naming ourselves after him: Die Klammern Family Singers...


Did you and Ian play music together as young kids? When did you start performing together? Was your sister ever involved in your music?


...Die Klammern Family Singers began in our teenage years, and it did include our sisters. In addition to learning songs like "Climb Ev'ry Mountain" and "My Favorite Things," we mainly used the "band" as an excuse to be able to sing the Velvet Underground classic "Sister Ray," mainly so we could sing the immortal lines: "She's busy suckin' on my ding-dong!" and "Whip it on me Jim! Whip it on me Jim!" In fact, "Sister Ray" was the only song any of the Family Singers ever sang. Years later, after the sisters had left to pursue baby-factory economics, the remaining Klammerns decided to form a "traditional" rock band. The name was shortened to Die Klammern (there could only ever be ONE sausage-stuffing Jesus/tuba aficionado), and we began to write rock 'n' roll ditties and perform at empty dive-bars at one a.m. on Tuesday nights.

I love the characters in this album. It seems to me that each song has a different narrator, a different voice, which is emphasized by the fact that each song sounds distinct. Yet there are common threads of emotion throughout the album: longing, desire, possession, loss. Can you talk about the characters in your songs, where they are coming from, what their stories are?

The songs on "The Peter & Ians Sing! Acoustic Renditions of the Lost Songs of Die Klammern" are exactly that: songs we never got around to recording while lugging amplifiers around while in Die Klammern. So these characters you mention were born out of the beer/3 a.m./Nintendo days of yore. When The Peter & Ians decided to unearth these lost songs, the songs got filtered through our sense of selves in this day and age: more of a whiskey/2 a.m./Nintendo vibe. As far as the specifics of a song, the legend of old tuba-stuffer Klammern lives on in the pious attention to Jesus in songs like "Water" and "JC." Since everyone in this world is a Christian by onslaught anyway, we (subconsciously?) decided to add our Jesus commentary to the mix. Either that or it's all we could think of as we frantically scribbled our lyrics on the back of our hands on the way to our first gig, straining madly to think of a word that rhymes with "dues."

For an album that purports to be acoustic, there is quite a complex mix to this album. Listening to it on headphones or in my car I really have the sense of the room in which the album was recorded, and you did an awesome job panning sounds around the mix. Can you tell me about the recording process and production for this album?

We are quite flattered that you describe aspects of our recording as "awesome." The photograph on the cover of the album is very true-to-life: we set up an old shit-box laptop one open window away from death on a desk in a tiny apartment, downloaded the free recording program "Audacity" off this world-wide-web of ours, and made some sounds. We were sad not to have these old songs to listen to so we could stroke our little egos, no, BIG egos, stroke our BIG egos, not that we NEED to stroke them, mind you, so we got set up in about five minutes, did a level check, and pressed record. Don't nobody go stealin' our secrets now!

You have a strange collection of instruments on this album. What was the inspiration to use things like cat toy, whiskey bottle, or cookie sheet?

The inspiration found in using instruments like cat toys or cardboard boxes stems from the same spirit we had going into the recording described above. If you need that "cookie sheet" sound, well, there's a dirty, crusty old cookie sheet in the kitchen just waiting to be banged on. It may be the old "Necessity is the mother..." thing, but a regular drum kit can be boring. Cookie sheets and ball-point-pen drumsticks are far more exciting. Plus, a drum kit was too "Die Klammern." If the guitars were to be acoustic, then somehow the percussion should be as well. Plus, we don't know how to play the drums. We decided to use hand-claps and snapping because those are things we can manage. We decided to use a whiskey bottle because we like to drink whiskey. "Whiskey is the father of invention".

How did this project differ from previous recording efforts?

Most recordings having to do with Die Klammern or the Family Singers were done on our own. We have to have complete control over our music: writing, producing, recording, mixing, blah blah, packaging, distributing, etc. Everyone should do it this way because we say so. Letting any of these aspects fall to anyone else is bad for the soul. These are your ideas and you know how to execute them. And if you don't know how, you'll find out. So there.

You can check out four of the six tracks from the "Sing! Acoustic Renditions of the Lost Songs of Die Klammern" EP over on The Peter & Ians' Myspace page. They will soon be selling the EP, which you really ought to buy simply for the liner notes and album art. The Peter & Ians are currently holed up in a studio apartment with a bottle of Inventing Whiskey working on a full-length album to be released in late spring/early summer. Until then I'm keeping The Peter & Ians EP in rotation; you should, too!

Jared said…
As a collaborator with the members of The Perter & Ians I have to say I thoroughly enjoyed this interview and I recommend to everyone to get a copy of this EP.

They masterfully combine the inventiveness and energy of their performances with me in Weak Bosons with folksy story telling and the skillful songwriting of the original songs this EP is based off of. Pure whiskey-colored gold.