March 31 was designated by jwz as Run Some Old Web Browsers Day, during which we were encouraged to download and run an old version of the Netscape web browser. Jwz, evidently well connected to the early Mozilla development team, had pulled a bunch of strings to get the "featured content" buttons working on the old browsers, get old domain names properly resolving, and other hijinks that he chronicles on his blog. In the end you have a cool walk down Internet memory lane.

I decided to run Netscape v0.93ß for Macintosh on a Quadra 610. This wasn't too huge a feat because that computer has ethernet. It was running a really old version of MacTCP, Apple's earliest TCP stack implementation for early Macs, which turned out to be a major timesink for me in this project. In 2003 I was able to get a Color Classic working on the Internet using MacTCP 2.0.6, so I figured I would just follow the directions I wrote back then and have the Mac on the internet in minutes. Evidently time caught up and MacTCP 2.0.6 no longer worked. MacTCP 2.0.6 is the final version released by Apple. However, this version was susceptible to all sorts of idiocy that occurs on the modern Internet and it was trivial to crash the TCP stack. In 2001 MacTCP quit working for many people because of changes made in the way larger networks were configured. However, a brave soul in New Zealand patched MacTCP and got it working. At first I battled issues with DNS, then Netscape would claim the server was not responding. I thought it was the Access Control List on the AirPort, so I turned that off. Nothing worked until I patched a clean copy of MacTCP 2.0.6 to version 2.1; subsequently it worked perfectly!

Here is the About screen once I had everything working: 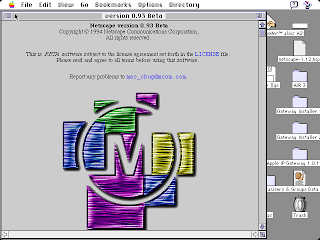 I loved the "What's New" page, which works again thanks to jwz's efforts. It is fascinating to look through and see who was putting web servers online in the early 1990s. Some of the servers are still online! 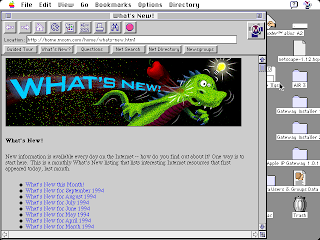 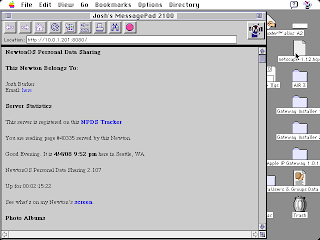 It was fascinating to give 0.93ß a run on the Internet. As jwz cautioned, most sites failed to load in 0.93ß because the old browsers do not send the required Host post to declare what they are looking for. So for giggles I ran Netscape 3.01, which with Java disabled actually worked on a number of sites! 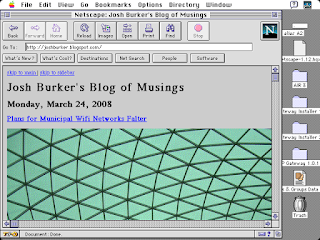 A exercise in total pointlessness, it was a great way to finish up spring break away from work and take a walk down memory lane. Along the way I learned how to find the ethernet MAC address in MacTCP, found out about this new Internet thing that is available on computers, and looked at the internet through a ten year old lens.
browser jwz MacTCP Mozilla Netscape retrocomputing