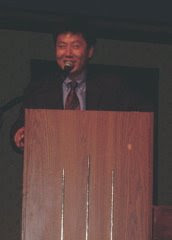 University Distinguished Professor in the Department of Counseling, Educational Psychology, and Special Education at the College of Education, Michigan State University

Presentation to the Mercer Island School District Community
May 12, 2008

These are my notes from Dr. Zhao's fascinating presentation on globalization and its implications on education.

= Meeting in Singapore: somebody is going to be a loser, who should the loser be?

- Everybody is trying to compete in the same domain
- PISA test

= measure in different ways: how many bottles of beer can you drink in 1 second?

= students from US, China, India
= "don't watch it if you haven't already"
= how American students are failing in their education
= conceit that China and India will surpass American education system
= American students don't know how to spend the 2 million minutes that comprise high school

= in China, for example, 2 million students are taking ballroom dancing to combat obesity

- In China, a 2002 policy forbids ranking school districts, schools, or individual students based on test results or making rest results public. Additionally, it calls for alternative assessment beyond testing
- Most countries are working towards decentralization unlike the U.S..
- Japan, since 2001, revising system

- Singapore has been revising since 1997

- Why does the U.S. take such a different path than China and East Asian countries?
- U.S. takes test scores as proof of achievement gap

- Maps of patents, toy exports
- East Asian countries realized that "testing and constrained definition of talents and knowledge is not the way to do it..."
- Traditional education is a dictatorship

= School Board decides what is important and needs to be taught

= the more any quantitative social indicator is used for social decision-making, the more likely it will be to corrupt pressures and the more apt it will be to distort and corrupt the social processes it was intended to monitor

- In China teachers are referred to as "gardeners"

- School Board decides what is weeds and what is flowers

= math, reading, and science are the flowers to cultivate; other talents are weeds to be removed

- School does not necessarily mean education
- What knowledge is of most use?
- Technology redefines talents

= flattening of the world

- Fragmentation of the production process

- Education can be outsourced as well

= tutoring services: Pakistan is poised to be the leader

= something that cannot be completely replaced for some time

- Cannot compete in the same areas: need talents different than others
- Yao Ming and Herbet Hoover

= global trade of talents
= both had special talents that were needed

- Globalization redefines talents
- To the students we produce complement their talents?
- Do we still see reading, writing, and math as the most important subjects
- McDonalds

= taught Japanese to be more relaxed people: won't eat without chopsticks, have to abandon tradition of using chopsticks
= taught people in Hong Kong how to stand in line

- Students are affected by global forces, culture clashes, and different value systems
- 30% of congress members do not have passports
- Isolationalism of the U.S./Mexican fence
- Climate change and the bird flu

= what happens elsewhere in the world affects us

= do not compete in the same area

- What kinds of skills do we need for a virtual life?
- Gold farming

- Every individual is becoming a personal producer and you do not need a network to produce
- Youtube and podcasting: running your own show

= everyone can reach an audience
= redefines talents and abilities

- Technology has created a new environment and a global world
- Need to think about what knowledge is worthwhile
- Schools are still defining math, science, reading as the standards

= does not give American students a promise of a good future

- Digital talents
- Need to enable children to become whole, well-rounded people
- Education is about bringing happiness
- Education, with technology, can be personal

= move from a dictarship to a democracy

- Creativity is tolerance of different ideas
- The U.S. has spent the most on technology

= China and India lag behind in this area
= the U.S. needs to continue to innovate in these areas

- Worth and value
- See rise in other economies as our loss

= can no longer be an empire: we need to coexist

- Nobody teaches how the globe is interconnected
- Culture clashes

- We do not teach conflicts: we teach people how to be comfortable
- His ideas are antithetical to this culture
- Most other countries place importance on sending teachers and students abroad
- Bring schools back to before NCLB, add globalism
- Virtual schools have grown very fast
- Imagine schools as global enterprises

= in many ways they already are global enterprises: the students are going to work on the global stage
= schools are judged ona global basis as well

- Personalized education plan for every child

- Offer your resources to others
- Niche talents
- Think of your school as a global enterprise, not a local entity

It puzzles me when Dr Yong Zhao states:

= students from US, China, India
= "don't watch it if you haven't already"
= how American students are failing in their education
= conceit that China and India will surpass American education system
= American students don't know how to spend the 2 million minutes that comprise high school"

Does he think people are so incapable of critical thinking that they can watch a documentary and make a rational assessment.

Would Dr. Zhao have people read, watch and think only what he believes.

I disagree with Dr. Zhao on most of his quixotic ideas about 21st century education, but I would never tell anyone not to hear him out.

In a free society like America, open debate and multiple points of view often lead to the best solutions.

Does he think people are so incapable of critical thinking that they can NOT watch a documentary and make a rational assessment?