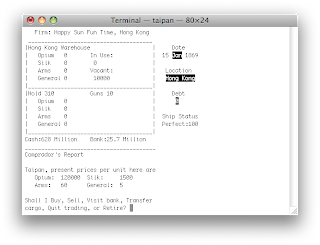 Eldrid and I played Taipan on my Apple //e this week and did terribly: he scored -117 and I got a 0.

Today I played it on my PowerBook on the version I found on the interweb. The Linux version compiles on a Mac with a minimal change to the makefile.

I started with 5 guns. Immediately got attacked by pirates and scored some booty. Started with general cargo, moved to arms for a couple of moves before getting more booty and starting in on the opium.

Didn't use Elder Brother Wu at all. Deposited money in the bank every couple of moves. Got robbed once, warehouse was ripped off once, busted by authorities once, had to pay 500k to Li Yuen once. Not bad all in all. 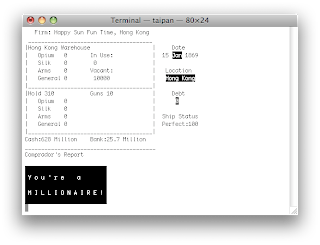 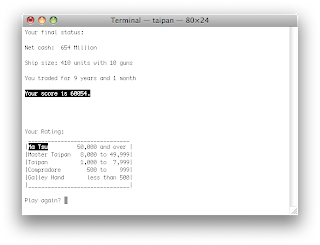