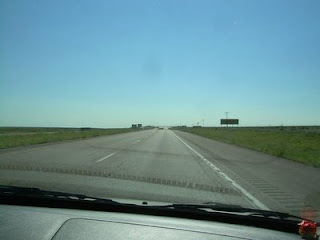 This was the beginning of the leg of the road trip that our mover Mike warned would be boring and without much visual distraction. He was right. Leaving Albuquerque we continued to climb in altitude for a while. Finally we leveled off and moved into the flat, flat, flatness of eastern New Mexico and western Oklahoma.

There was very little to break the monotony of the voyage. When lunch finally came around we had to find a place to eat since we had not bought groceries on the way out of Albuquerque as we stayed by the airport, where there weren't any grocery stores that we could see. We were ready to settle for Subway, which has reached a near ubiquitousness (and which, in the grand scheme of food on the go, is probably a good thing), when we noticed a local enterprise that looked promising: Texas 2 Step Gourmet. 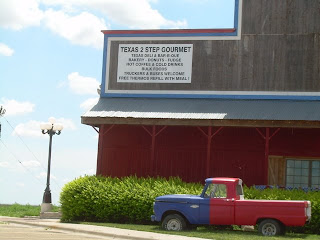 Intrigued, I went in and got us two "John Wayne" sandwiches: beef brisket on a bun, cheese and onions optional. Delicious. The shop was chock-o-block full of hot sauces, Texas memorabilia and other cooking goods. It's a hard draw, but being in the middle of nowhere has its advantages: it is something to see where there is little to see.

Right off I-40 is a great piece of outsider art, the Cadillac Ranch, situated in a corn field. There are no brown signs to announce its presence: you had better pay attention. 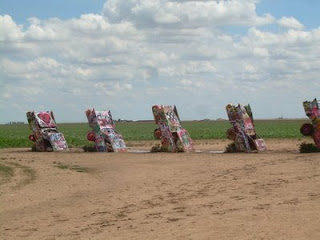 You can get off I-40 and double back to reach the field. A sign warns not to paint anything on the road side of the fence, as it is Texas property. The cars are covered in unbelievably thick coats of paint: they seem to be more paint than steel at this point. 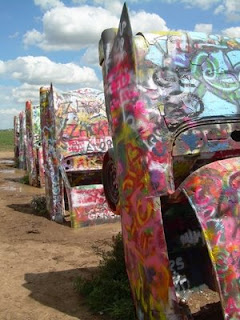 Somebody handed Meg a Sharpie, explaining somebody else had passed it to her and Meg was to pass it on. Meg added our names to the monument. 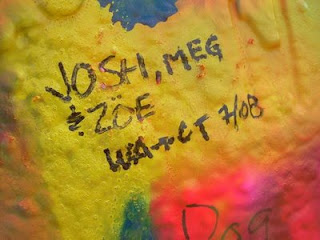 As we raced from a big lightning storm in western Oklahoma, swarms of dragon flies hovered above the highway. It was crazy to see so many in one place.

We ended up at Henry Hudson's, a local where Meg got a weird vibe but where I enjoyed the sights and the food. It was a good end to a long day.