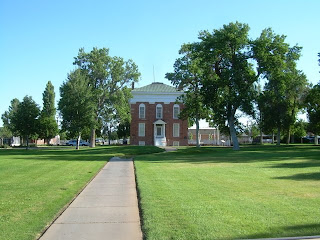 We got up at seven a.m. to try to beat some of the heat in Fillmore, Utah. We headed south down Main to reach the Territorial Statehouse State Park, shown above. The weather was perfect, probably in the low eighties, and the grass was cool on Zoe's belly: 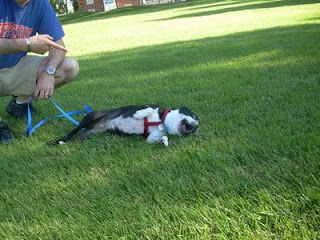 We walked around the park for a while and read the plaques and displays. The thing I found most interesting was the masons carved their initials into the stones used for the building, expecting they would be covered by plaster when the building was completed. I found this one at the top of the building with the same initials as my mother: 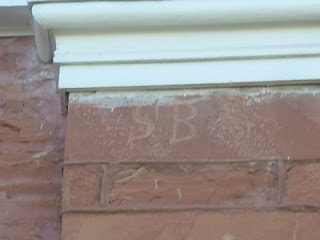 Meg found it interesting that Fillmore was indeed named after Millard Fillmore, as suggested by her mother the other night when they spoke about our itinerary. There is even a Millard county.

Meg planned a route that took us through Zion National Park in Utah. On the way into the park proper, we stopped for lunch at the George A. Barker Springdale River Park, a beautiful respite from the road with a nice river running alongside the park. There were picnic benches under nice shade trees. 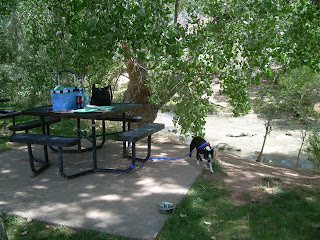 Additionally, there was a nature trail and dog park across the bridge from the park: 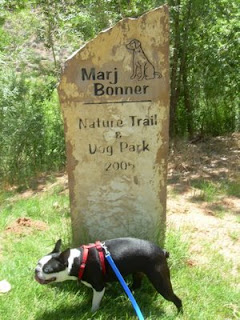 We took a walk along the trail that meandered alongside some big hills. It was stunningly beautiful. 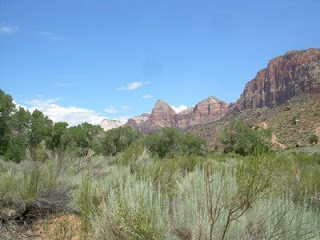 It was about five hundred degrees out. Zoe and I nearly melted. 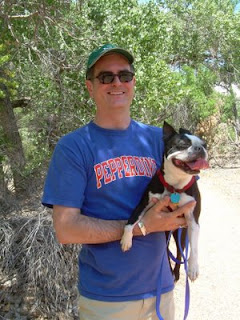 So we hopped back into the air-conditioned car and headed down the road to Zion National Park. Words fail to describe the views and geologic wonders. 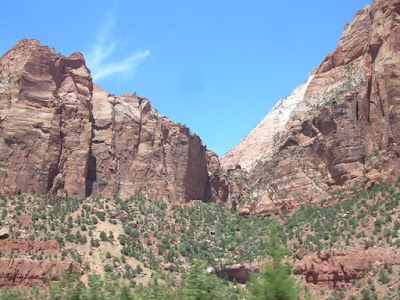 Afterwards we crossed through some pretty rough weather, but Meg piloted the car like a champion. 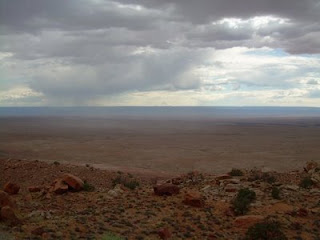 We finally made it to Cameron Arizona's Trading Post. We walked Zoe, had some dinner, and were rewarded with a great view and a beautiful sunset. 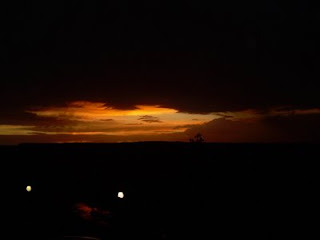 Gas Mileage for the day according to GeekGas: 33.345 mpg over 190 miles; 41.3415 mpg over 196 miles. I think the sudden drop in mileage on the first tank of the day way due to the 75 mph I drove for a bit in haste to reach Fillmore yesterday, as well as some of the long slow grades we climbed yesterday to get there. However, we finally broke 40 mpg today! I feel hopeful that once we get out on the open plain we'll be averaging above 40 mpg.

A little more about the car. It has a 2.0 liter 4 cylinder DOHC engine. We have also been running the air conditioning since we went over the pass into Eastern Washington. Before we left we averaged around 28 mpg on the highways and running around town. The high gas mileage can be attributed to keeping the speed between 65 mph and 70 mph. As shown, driving 75 mph really affects the gas mileage. Taking it slow, we are....
Arizona road trip Utah