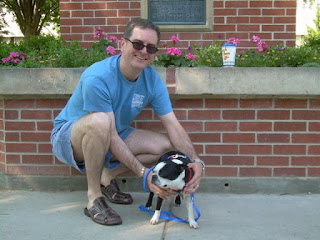 After a fitful night sleep with the snoring of sweet Zoe to keep us awake (how such a small dog can produce such resonance deserves advanced study), we drove back towards The Dutch Goose through the Caldwell Historical District. This was an amazingly beautiful stretch along Cleveland Boulevard that appears to have been built around the turn of the Twentieth Century, with many Craftsman-style houses that were in beautiful shape, tall shade trees, and a feeling of a different time.

We found some amazing coffee at the drive-through Dutch Bros. Coffee, whose staff was upbeat and excited to talk to us. We took our coffees down the road to The College of Idaho's beautiful campus. 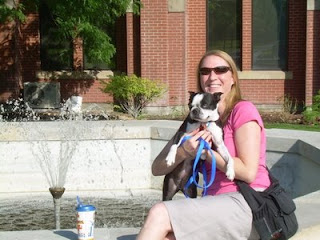 There we ran into a couple of basset hounds that really dug Zoe.

We got on the road again and headed towards Fillmore, Utah, the first capitol of Utah. Our trip to Fillmore was a bit auspicious because of the date. The Mormons, led by Brigham Young, came into the Utah Valley through Immigration Canyon on July 24, 1847. Brigham Young announced, "This is the place" and he and his flock settled. Today it is celebrated as Pioneer Day in Utah, a holiday bigger than the 4th of July, according to my mother, who grew up in Utah.

Along the way we stopped at a rest-stop to have a picnic lunch. They had some really cool picnic stations scattered around the property, which also had a sign explaining that the modern location was on the edge of a prehistoric salt lake. 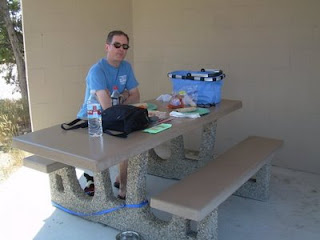 Additionally, there are many ferruginous hawks in this part of the country. Evidently they nest in the area near the rest stop. There were also juniper trees all over the property. 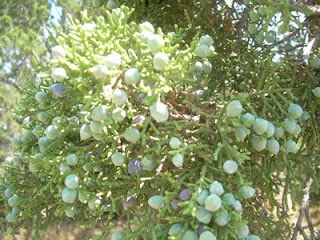 Another cool wildlife feature in Idaho was the prevalence of birdhouses mounted on the back of highway road signs. I am not sure what kind of birds they are housing, but it is a cool project.

Today we read out loud from Jonathan Mooney's Short Bus: A Journey Beyond Normal, the author's tale of his personal triumph of overcoming society's label of being learning disabled along with his travelogue of piloting a short bus on a cross-country loop around the country talking with other people who have been similarly labeled. At times leaving us nearly in tears, other times laughing out loud, this is a must-read.

We ended up ordering in room service at the Best Western Paradise Inn Resort in Fillmore where we stayed, which was quite tasty after a long day on the road, and we watched the end of Galaxy Quest on cable. After dinner we took Zoe for a stroll and witnessed a fine fireworks display at the trailer park in honor of Pioneer Day.

Gas Mileage for the day according to GeekGas: 37.3729 mpg over 305 miles; 38.5952 mgp over 311 miles. Meg and I are very impressed. We're keeping it around 70 mph top speed, though every now and again we hit 75 mph to pass a truck.
Fillmore Idaho Jonathan Mooney Mormonism Pioneer Day road trip short bus Utah