Visiting Ire-land with The Peter & Ians 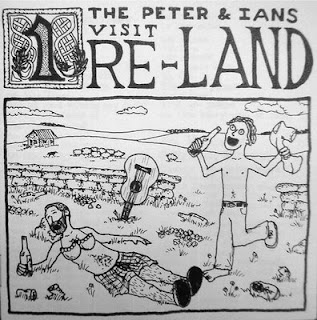 My friend Peter sent me a copy of The Peter & Ians latest release "The Peter & Ians Visit Ire-land" shortly after I arrived in Connecticut, but with life as busy as it is and my second generation iPod filled to its capacity, I had not yet had a chance to listen to this album on my headphones and to pay close attention to the production values I loved so much on their first release, The Peter & Ians Sing! Acoustic Renditions of the Lost Songs of Die Klammern. I listened to the CD a bunch of times in Meg's car but that is hardly the optimum listening environment. That all changed this morning when I removed some music from the iPod, loaded the Peter & Ians oeuvre onto the iPod and walked my way to the Stratford train station.

Much like the first album, there are themes of loss, anger, and love in their second release. I continue to be reminded of Ween in some of their sound, which is a great thing. "Hot Noon-Day Sun" conjures memories of Ween's "The Blarney Stone," appropriate as Peter and Ian explore one of my favorite emotions, ire. The production on the first few listens seems not as "expansive" as their first release; I really loved how wide the sound was on "Sing!," with the banging cookie sheets, claps, and whiskey bottle taps surrounding my head. The "found" instrumentation does make an appearance on some tracks, however, and by the time you get to "You're a Bum" the familiar bangs, finger-snaps, and pots and pans are back in place. In terms of a thematic album "Visit Ire-land" definitely does a great job of picking up where the last album left off and exploring the anger and emotions surrounding what must have been a doozy of a break-up.

As I mentioned in the interview Meg and I conducted with the band, they holed up with a bottle of Inventing Whiskey in a studio apartment in Portland and churned out another EP. This time the "instrumentation" is a bit more sparse than their first release, though the title track, "Ire-land," has a great laugh-out-loud crash of dishes, glasses, claps and empty bottles in the track and "Carpet Floor Drunk" has some great ambient discussions I wish I could catch in the background. They also seem to have gotten their hands on a violin and give us some great sounds very reminiscent of John Cage's work with Velvet Underground on the tracks "You're a Bum" and particularly "Our Evening." I know that VU was a big influence for the brothers, so it's cool to hear that come out a bit.

I like this album because we get a more unified narrative; their first album has many different characters on it, but this album seems to have a more singular narrator who is lamenting his lost love, the anger surrounding the breakup, and the booze that keeps the demons at bay.

As always, Peter's artwork is awesome, with Ian swinging the shelalagh while Peter lays passed out under the hot noon-day sun. The liner notes contain all the lyrics, hand-lettered. The songs are as catchy as those on "Sing!" I appreciate that they keep their unique sound intact yet do not remain tied to a particular sound. This album has some great Irish-sounding jig guitar runs on it. It's harsher and more brash than their first, as if they gained confidence in their sound and their message. I would have loved to have been present at the recording of this one, and to perhaps have taken a pull from the whiskey bottle and added a couple claps and crashes of my own to the sounds.
acoustic Audacity ire lo-fi The Peter and Ians whiskey