January 26, 2009
So, live blogging at FETC didn't work out. While they had free wifi, you had to open your browser and let it redirect to an ego-stroking message from the sponsor before the wireless connection would work. Unfortunately, as I have the eMate configured I couldn't fit NetHopper on it, which would have handled a re-direct. I got my MessagePad working with a re-direct when I took it to a conference, so I know it would have worked. I have to figure out what to remove from my eMate so I can shoehorn NetHopper onto it.

However, I did use the eMate to take my notes for the day. There were some good, informative presentations I attended. I will get them posted as soon as I have a chance to spell check them.
I also managed to find the "grocery market" across from the Convention Center that Allen and I found in 2005, when we were at FETC with our OMET cadre. I knew they had a good lamb gyro, and since I hadn't had one since moving to Connecticut I was pretty excited. I refreshed myself after my presentation. 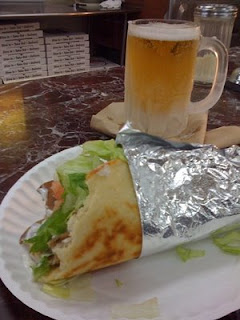 Update: I ended up removing a couple of packages from my eMate that weren't needed, like the Newton Internet Enabler Modem and Serial support, since I use a wifi card to connect to NCX and the Internet. However, even after removing packages I still had only 460K available, and NetHopper 3.2 takes about 440K of storage space. Exasperated, I looked at the Storage soups on the eMate and found that the Courier cache was 335K! I set the Courier cache preference to be 10% of the store size, hence the huge cache. I cranked that way down, to its lowest setting. I now have nearly 800K of space, enough for NetHopper with plenty of space to spare.
blog Courier emate FETC NetHopper Newton wifi