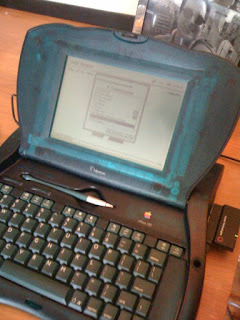 Hot on the heels of his Y2010 Patch for the Newton MessagePad 2100, Eckhart Köppen released the 73J186 patch for the eMate 300. This patch fixes the Newton's Year 2010 problem and keeps this platform viable more than ten years after it was canceled by Apple.

I used Simon Bell's Newton Connection for Mac OS X to install the patch from my PowerBook onto my eMate via a wireless PCMCIA card and Hiroshi's wireless driver, generously donated to the Newton Community. The installation went without any trouble, I rebooted the eMate and confirmed that I had version 73J186 installed.

Eckhart is to be commended for creating this patch with no assistance from Apple. Without this patch our Newtons would not work properly next year. Thanks again Eckhart!
emate Newton NewtonScript