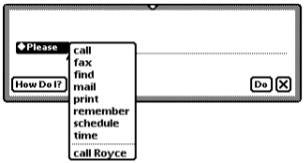 Reading a recent Wired Article about TRON: Legacy I was struck by a part of the article recounting Alan Kay's involvement in the original TRON screenplay. He and Bonnie MacBird, who wrote the TRON screenplay, started a discussion in 1979 about the potential of technology to create digital identities that might connect humankind. 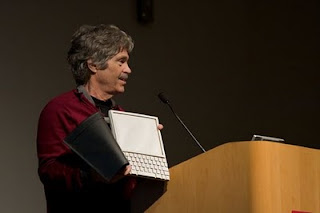 “We didn’t have the word avatar yet. We talked about agents,” MacBird says. “Alan had the notion of an intelligent agent that learns you, learns your preferences and needs and can function in a realm of endless encyclopedic information.”

This concept of a digital agent immediately made me think of the Newton Assistant, part of the NewtonOS on MessagePad 2000/2100 as well as the eMate 300.
Apple's Tech Archive document spells out how the Newton Assistant works. Conceived of as a Personal Digital Assistant, the Newton stored your contacts, your calendar, your phone calls and faxes, as well as your email. The NewtonOS allowed each of these applications to access one another's databases, or soups. A Calendar event could be associated with a Contact, for example, and one program could make use of the data from another program, such as email addresses, phone numbers, or birthdays. Bringing access to all of this data together in an approachable manner was the Newton Assistant. Apple's document describes it this way:

The Newton Assistant is the intuitive part of Newton. You may ask it to do things for you using various key request words. These words may or may not be capitalized, and each has several acceptable synonyms.

The Newton user can write in the Notes application, Meet Josh for lunch, highlight the text, tap on the Assist icon, and a new Calendar event with Josh and his contact information will be created at noon on the next Tuesday in the calendar month. Impressive and useful, this artificial intelligence marked the beginnings of something like Alan Kay's digital agent that learned the user's preferences and provided the user with needed information.
The NewtonOS was a social OS before we had Facebook. As a Personal Digital Assistant, the Newton MessagePad tracked the user's business and social calendar and managed his or her digital filofax, maintaining a familiar Rolodex-style card for individual or business contacts that included phone numbers, email addresses, and web pages. Once a meeting was arranged, the Contact's information would appear in subsequent Calendar slips, facilitating the creation of new appointments. The NewtonOS social applications, Calendar, Contacts, Phone, facilitated subsequent meetings and interactions because the NewtonOS drew on a shared database of contacts.
Nowadays my master list of contacts still resides on my Newton MessagePad, family friends' addresses, friends' birthdays (of which I am reminded of by the wonderful Avi's Backdrop, which accesses the Contacts database) but increasingly my contact information is migrating to an iOS device.
One failing of iOS in my use is that information from the Contacts app doesn't tie in with the Calendar on the phone. There's no Calendar event field in which a Contact can be tied to the event. I would find it useful to tie a Contact to an Event because it could bring the Contact's data into the Event. My phone could be configured to text a reminder to the Contact prior to the Event, or send email relevant to a scheduled Event. However, in iOS the Contact and Calendar apps exist monolithically, not tying data together in a way that would meaningfully connect people's data across social networks.

Kay believed that a universe made of connected computers was akin to a living organism, a vast network with nodes and branches to infinity, all serving some artistic, humanitarian vision of a utopian future.

The feature that most excited me about iOS devices is its potential for augmented reality. Apps such as Google Googles or Yelp's Monocle feature excite me. It would be interesting to me, as a Yelp user, to have suggestions based on business check-ins, for example, highlighted in the view. Likewise, Google Maps could be improved for me as a Google User, if Street View or Maps highlighted businesses or locations based on reviews I've written or past searches. It seems that the web services that have us as their userbase and have access to our data aren't best using that data to customize our experience with the real world. Augmented reality still hasn't entered the popular imagination yet: few people I've run into use Google Goggles or Yelp's Monocle feature yet, though one uses Google Goggles to take photos of restaurant facades to get user reviews. Awesome!
agent Alan Kay augmented reality emate Google Goggles iOS MessagePad Newton Yelp