July 10, 2012
Day two at CMK started with me completely redesigning the phonograph's arm, based on Jose Pino's designs. Mr. Pino used a pushpin for his stylus. I got one from the front desk at the hotel where the institute is held but found that even after sharpening it on the curb like the sewing needle it was simply too wide of a diameter of a pin to fit into those tiny record grooves. We decided to stick with the sewing needle. 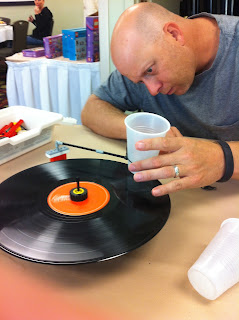 As you can see in the photo of Mark above, we started with the cup standing vertical at the end of the arm. However, when we dropped the needle onto the record it made a pretty horrible noise. We cut a wedge of foam and put the needle and cup at an angle. 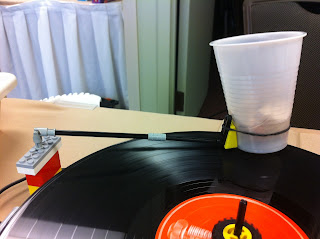 We started the record spinning from the simple Scratch program I wrote and listened to the results.

It sounded good, it was louder than the original version, but the high frequencies really stood out. We adopted Mr. Pino's technique of putting a paper napkin at the bottom of the amplifier horn to dampen those high frequencies. The result? A phonograph that played loudly enough without electronic amplification that people could hear the record across the room!

This was a very fun project with many interesting engineering challenges along the way. It was great to work with Maryann and Mark to get this phonograph working well and playing records loudly without any electronic amplification.