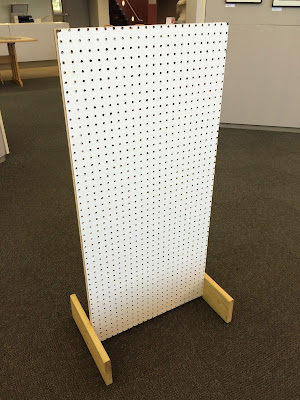 There is something about the monolith shape of the Marble Machine that taps into our monkey brains and causes us to tinker with it until a goal is met: getting the marble from the top to the bottom through a series of ramps, tubes, funnels, and whatever other materials are on hand. I enjoy using the marble machines in workshops lately because it is hands on, engaging, hard fun.

Additionally, the Marble Machine is a great place to explore the concept of bricolage, or a DIY sensibility of making do with the materials on hand. When I used the Marble Machine in my latest workshop I provided a number of materials that one might expect with a Marble Machine, like ramps and tubes. I also broke free from the siloed nature LEGO WeDo sets and I added the MaKey MaKey. Instead of treating the LEGO as a distinct play set, what if some of its components were cleverly used in the Marble Machine's construction? What if the goal of this Marble Machine challenge were impossible to accomplish without a MaKey MaKey? 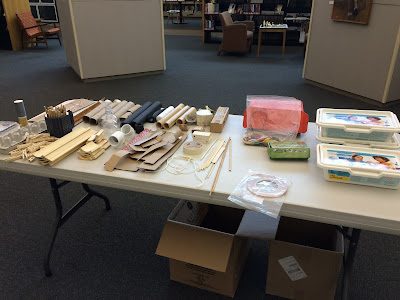 Only two people enrolled in this particular workshop. I provided minimal direct instruction beyond explaining how the MaKey MaKey and LEGO WeDo worked with Scratch. Mostly, I stood back and observed. The goal was a little tricky: make the Marble Machine play music as the marble descends. The participants were a little overwhelmed, so I suggested the opening of "Thus Spake Zarathustra," since it contained four notes.

We started by brainstorming a course of action.


The participants worked for about forty five minutes on their course. 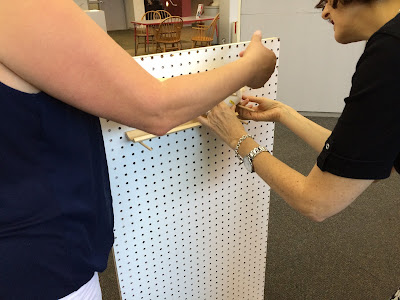 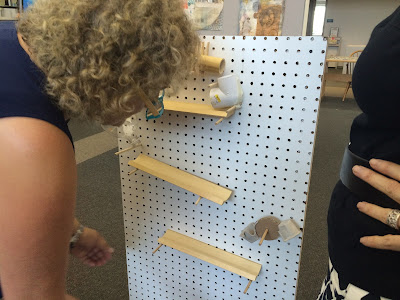 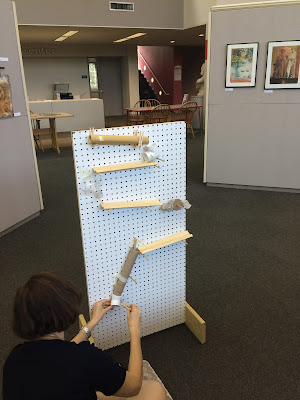 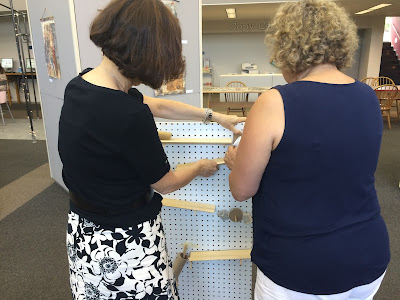 By the time they were called back to their regular jobs, these two had built a Marble Machine that usually got the marble from top to bottom and sometimes landed the marble cleverly in an egg carton at the bottom. Instead of leaving the goal of making it play music unfinished, one of the participants sent her son, who was in the library, to assist me in finishing the Marble Machine.

Several times during the course of our work I was ready to give up. Most of the frustration grew from trying to get the wired ramps to work properly with the MaKey MaKey. We were using a marble covered in aluminum foil. The ramps had parallel strips of conductive copper tape adhered to them and hooked to the Earth and key ports on the MaKey MaKey. However, the marble tended to wobble down the ramps, sometimes not making contact between the two strips long enough for the MaKey MaKey to register a key press. However, the young man with whom I was working was so engaged in making the marble consistently land in the egg carton that I was compelled to complete my part of the task.

One way I worked around one ramp not registering consistently with the MaKey MaKey was by using the LEGO WeDo distance sensor on the second ramp. 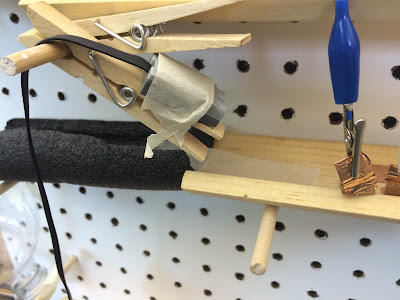 A Scratch procedure that waited for the marble to get below a distance of "20" as read by the distance sensor then played the note for that ramp.

After working out the bugs that made one ramp stop working as soon as we got the ramp before it working, we had a successful run that we captured on video!

The Marble Machine is a wonderful constructionist project that allows people to construct knowledge about engineering through iterative tinkering. By adding additional tools, such as LEGO or the MaKey MaKey, one expands the potential for bricolage with the Marble Machine. Such an activity can promote experimentation with new technologies that otherwise might seem intimidating to begin tinkering with. The Marble Machine scales from children to adults and can be used by people of all ages working side by side. Build yourself one today and start having hard fun.
engineering iteration Lego Marble Machine programming Scratch tinkering WeDo