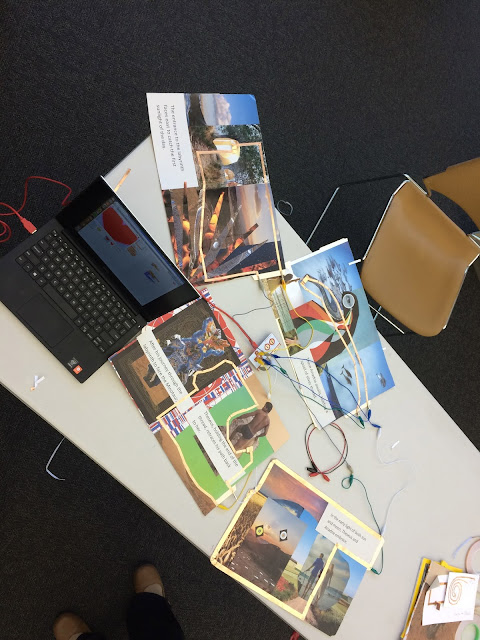 I led a workshop for adults at the Westport Library. I hoped to get ten people to help produce a MaKey MaKey Scratch Interactive Storybook. Two fantastic individuals showed up and helped me realize this project.

Inspired by fellow contest winner Praxis' great MaKey MaKey Interactive 'Zine guide, I wanted to create a storybook that contained circuitry. The circuits would connect to a MaKey MaKey. The computer, running Scratch, would add to the narrative of the story. I kicked this idea around in my mind for a while while I waited for the right workshop to try it.

First, I needed a story. I found the perfect story in a park in Seattle. 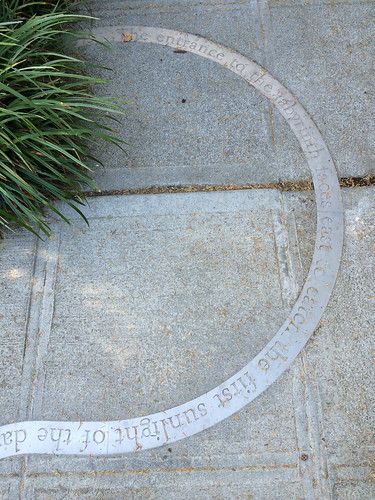 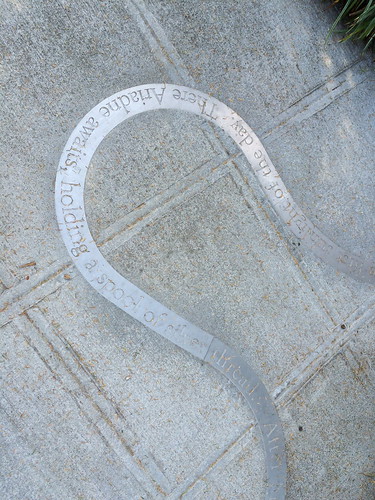 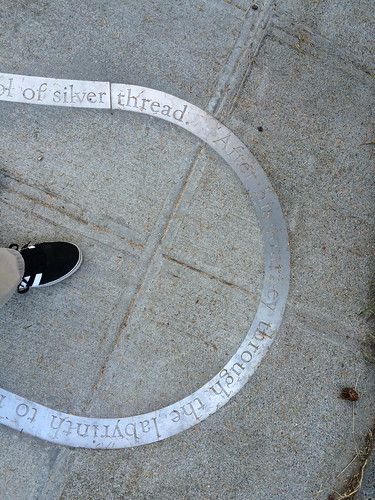 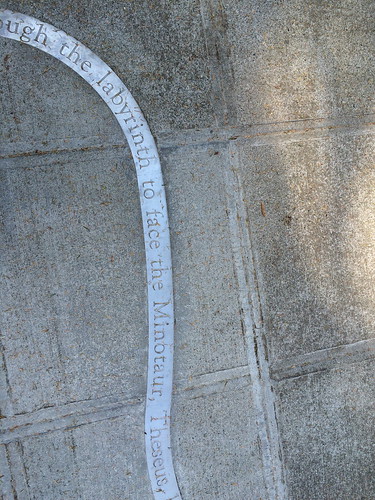 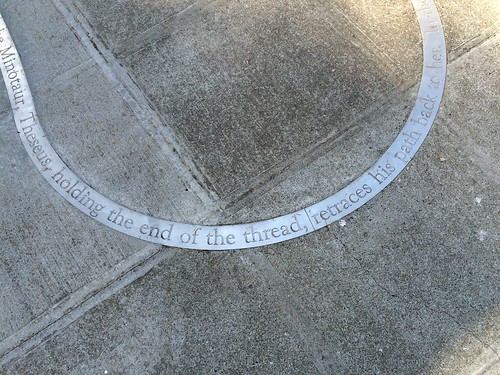 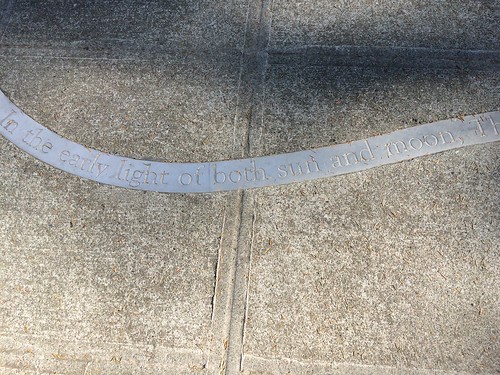 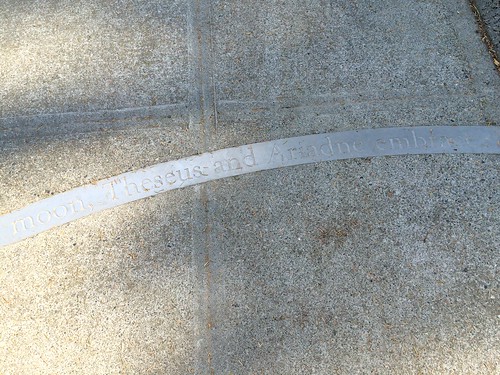 "The entrance to the labyrinth faces east to catch the first sunlight of the day. There Ariadne awaits, holding a spool of silver thread. After his journey through the labyrinth to face the Minotaur, Theseus, holding the end of the thread, retraces his path back to her. In the early light of both sun and moon, Theseus and Ariadne embrace."

I provided the supplies. 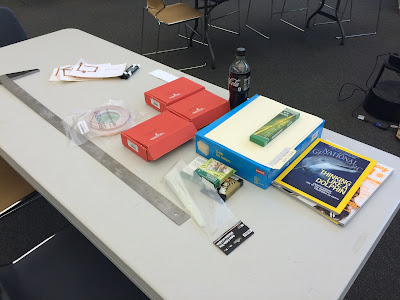 Whenever I run a workshop that involves drawing, people always complain that they cannot draw. I headed off that self-perceived flaw by deciding we would collage the images, covering all the manila folder. We started by collecting images for each double page spread that would contain one sentence, a circuit, and a simple switch. 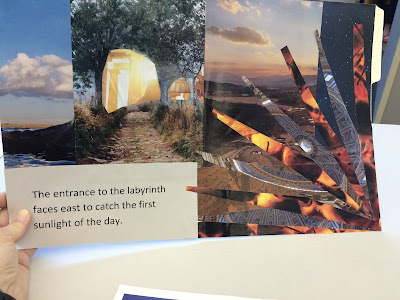 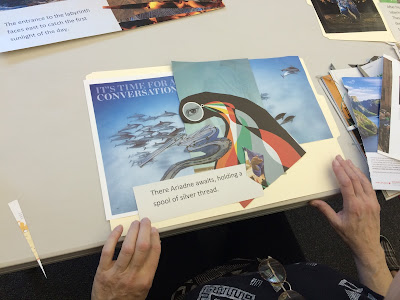 I built two of the double page spreads, Laura built one, and Steven built the last pages, which I did not manage to photograph until after he built his circuit. 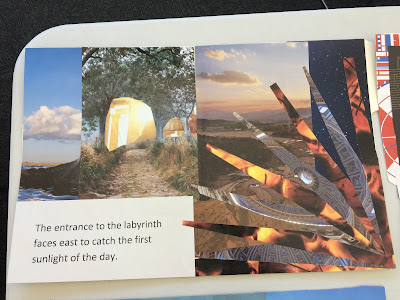 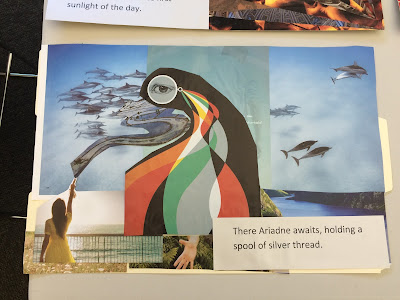 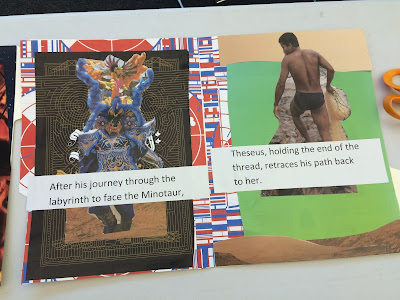 Next, following Jie Qi's advice about building copper tape circuits, we each constructed a circuit that included a gap. We bridged the gap with a small piece of half inch copper tape that was pressed down into onto the smaller copper tape to close the circuit.

I appreciate how the copper tape circuit suggests the silver thread in the story. 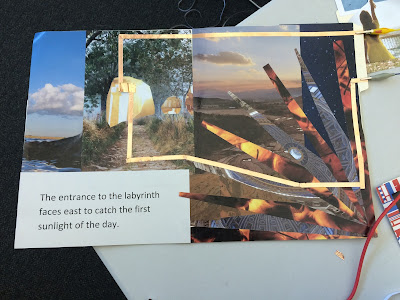 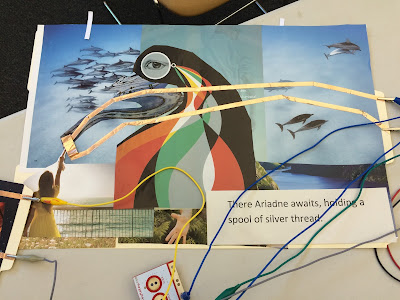 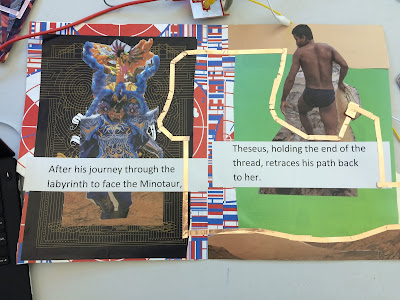 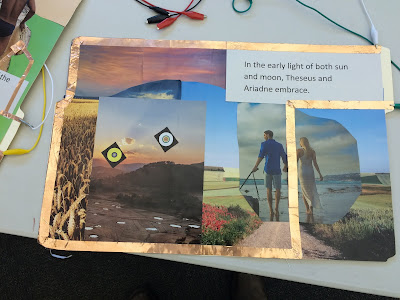 Closing the switch on the physical page made the MaKey MaKey send a key press to our Scratch project. We worked way longer than the hour and a half that we were supposed to work, but we were all engaged. The Scratch project could be more deeply developed, but it managed to capture the story through imagery.

The key sequence is Start flag, up arrow, down arrow (hold it down for as long as you need Theseus to wander), left arrow, right arrow.

I am very proud of the final result. I am also happy to have found a new use for the MaKey MaKey that delights the English major in me.

I urge you to remix this project and expand on what an interactive book can do. Admittedly, this Scratch project is not too crazy complex, but frankly we were running out of time. I dig the Logo spiral routine and the wandering thread was Laura's great idea.

A few ideas when you make your own:
This was another hard fun learning adventure made possible through the magic of MaKey MaKey combined with Scratch. I think you need to show this to your English Literature, Language Arts, World Language, and anybody else who values narrative and storytelling and is looking to engage people through interactivity with the written word. Please share your remixes!
collage copper tape interactive Makey Makey Scratch storytelling

Danny Maas said…
Josh, this is such a great activity on so many levels. Thank you for your dedication to the engagement of our students!
@dannymaas
September 13, 2015 at 11:08 PM