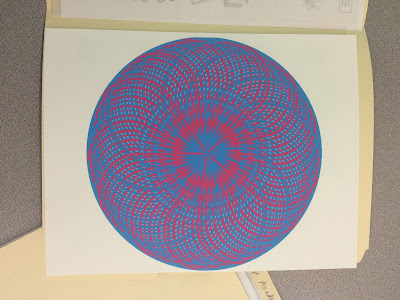 The Turtle Blocks after school club students' participation fluctuates from week to week, but our first big project is coming to an end with almost everybody completing it.

This summer I was fortunate to meet Dr. Sherry Lassiter, director of the Fab Foundation, when I toured MIT's Media Lab with Constructing Modern Knowledge. 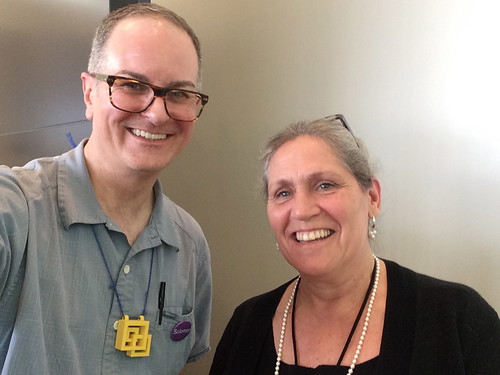 Dr. Lassiter spoke about the establishment of Fab Labs around the world and the transformational learning that occurs at each location. She spoke of the importance of moving projects from bits, on the computer, to atoms, in the physical world, through fabrication such as 3D printing, circuitry, laser cutting, and myriad other technologies.

I was very inspired by her talk and went on to facilitate two projects about personal fabrication in workshops for students. Both workshops involved programming designs in Turtle Blocks. One workshop transformed their digital designs into 3D printed stamps for stamping Play-Doh. The other workshop's designs transitioned from bits to atoms by etching them in rubber with a laser cutter and building rubber stamps. Afterwards, I wrote a paper that was accepted and published by RED, Revista de Educación a Distancia, Going from Bits to Atoms: Programming in Turtle Blocks JS and Personal Fabrication in Youth Maker Projects. 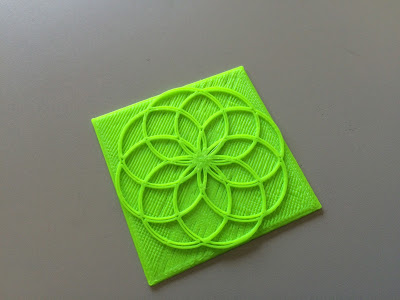 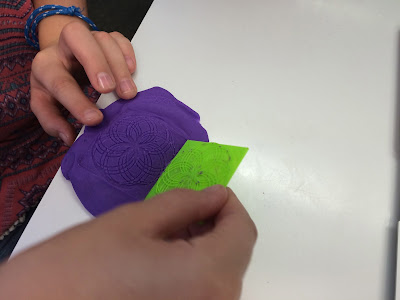 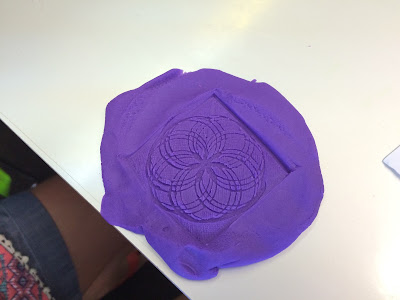 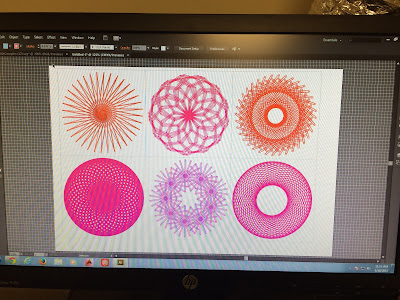 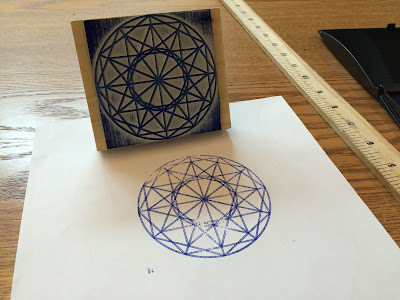 I wanted to run a similar project with Turtle Blocks Club as a way of teaching these students that their designs could progress from digital to material. I chose our first fabrication project to be iron-on designs. They could be printed on the inkjet printer I owned, the paper was not too expensive for me to purchase (because teachers often buy supplies out of their own pockets), and the resulting t-shirts or sweatshirts would be walking advertisements for the students' programming prowess.

Only once the students were comfortable programming in Turtle Blocks did I announce that they could program a design to turn into an iron-on. This way they were not rushing to produce a design simply to have a design. By the time I mentioned this idea the students had each experimented with at least two designs.

The quality of the students' designs and the time they took to refine their work was commendable. 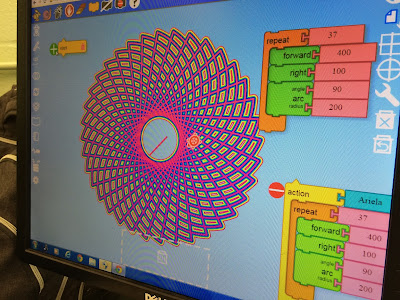 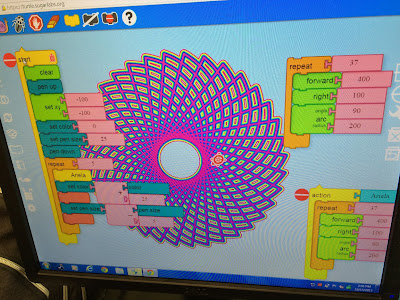 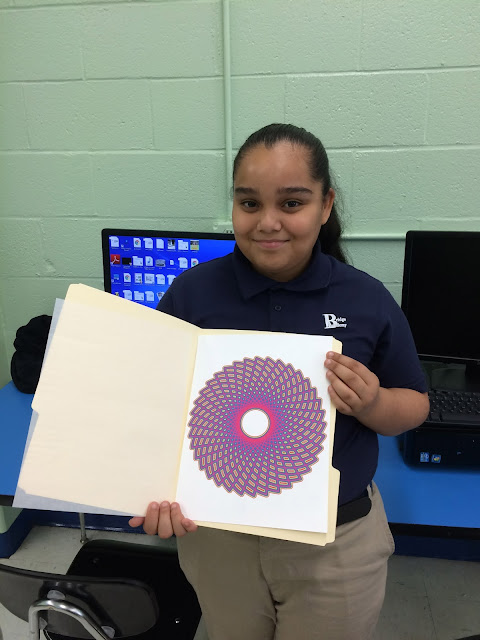 This design was a collaborative effort. I liked the original design and remixed it. He liked my remix and wanted another smaller version in the center. He worked on it really hard and succeeded! 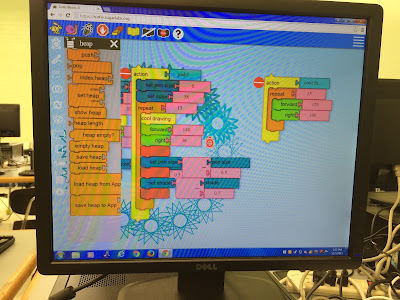 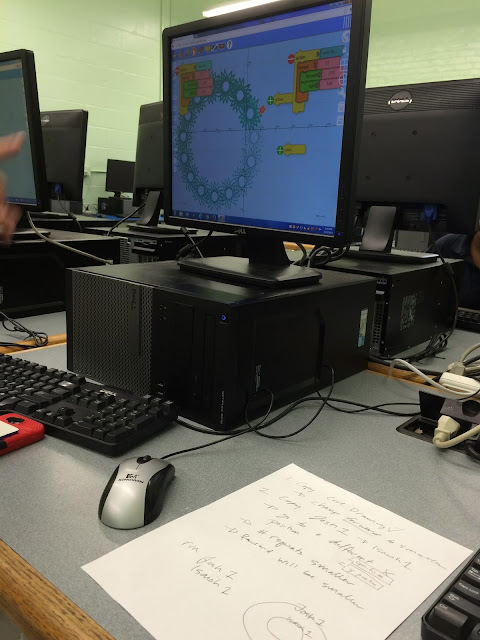 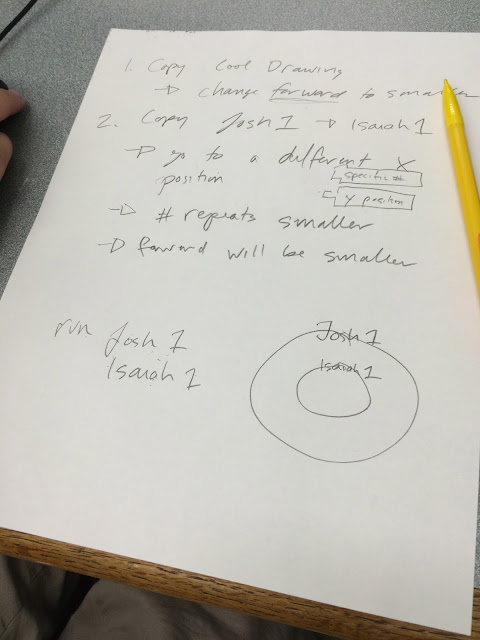 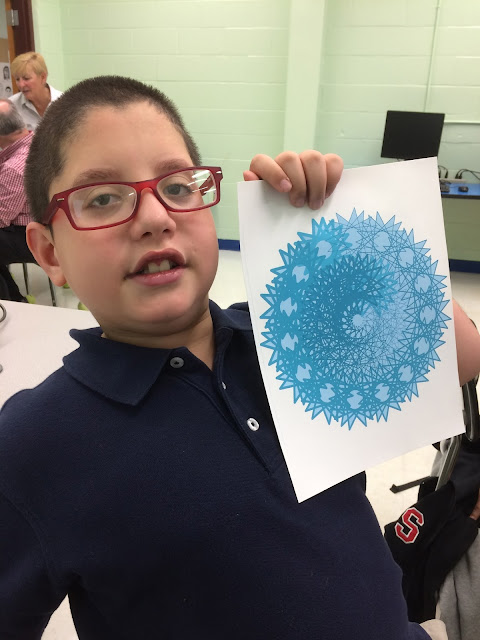 This student has not attended every club. However, early on he developed a vocabulary of shapes and designs that he refined into a complicated design that will look cool on a t-shirt. 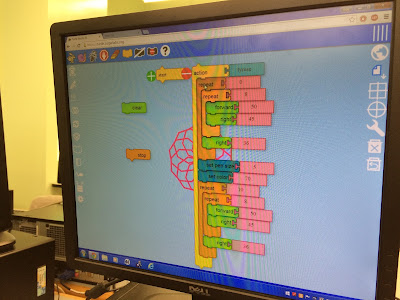 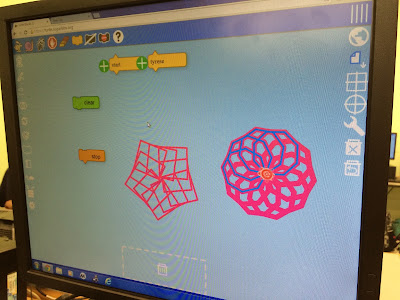 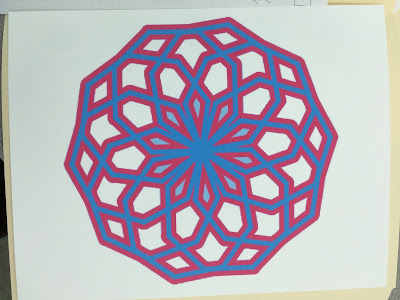 This student joined on week three. He quickly caught himself up and developed this striking design. 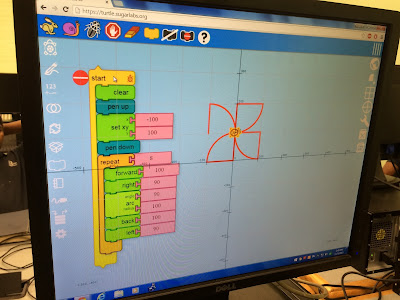 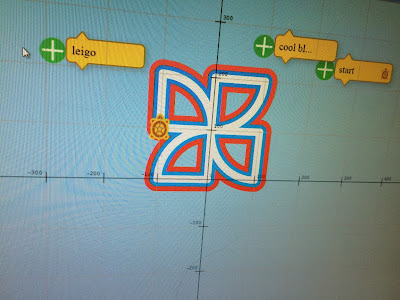 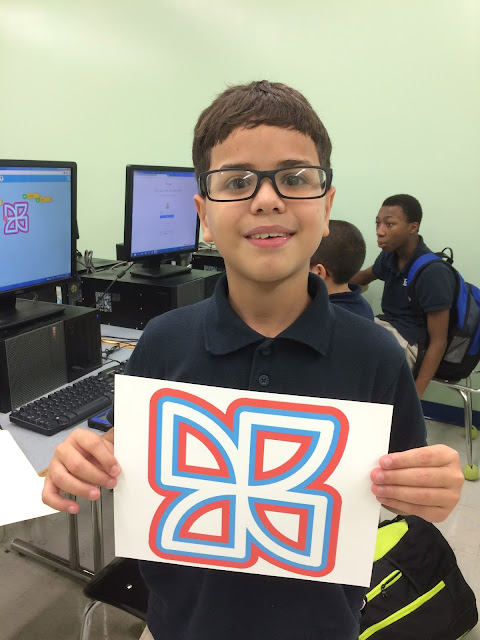 This student does not always attend club but he "gets it." His design is incredibly complex without being messy. 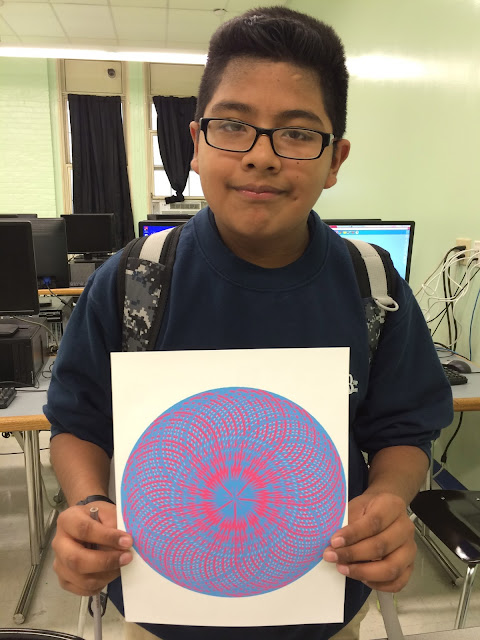 This project was a big hit with the students, who were excited to see their own artwork on clothing. People often associate "making" with expensive technology such as 3D printers or laser cutters. Sometimes, the most powerful and personal projects can grow out of a hi-low tech approach.
constructionist crafting Logo making programming Turtle Blocks

Gerald Ardito said…
Josh,
This is just amazing work.
I have been using Turtle Blocks with students for a long time now, but had never considered the digital to atoms piece. Thanks for that.
Keep up the good work.
Gerald
December 6, 2015 at 8:29 AM

edugoo said…
Hello! I write from Argentina. Very nice to know about you work.
I wish to know how do you connect the turtle design with 3d printer.
The link "Going from Bits to Atoms: Programming in Turtle Blocks JS and Personal Fabrication in Youth Maker Projects" doesn´t work to me.

Some of the blocks have changed shape slightly but that explains the workflow for going from Turtle Blocks to a 3D printed model.
December 21, 2015 at 2:50 PM