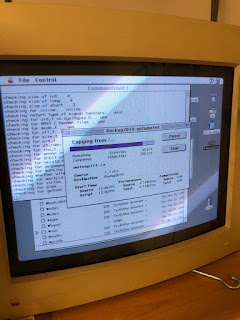 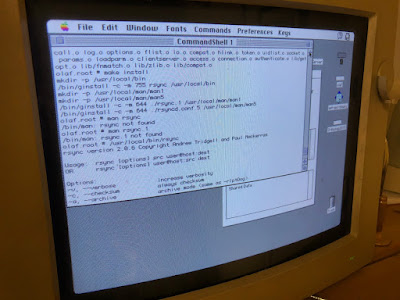 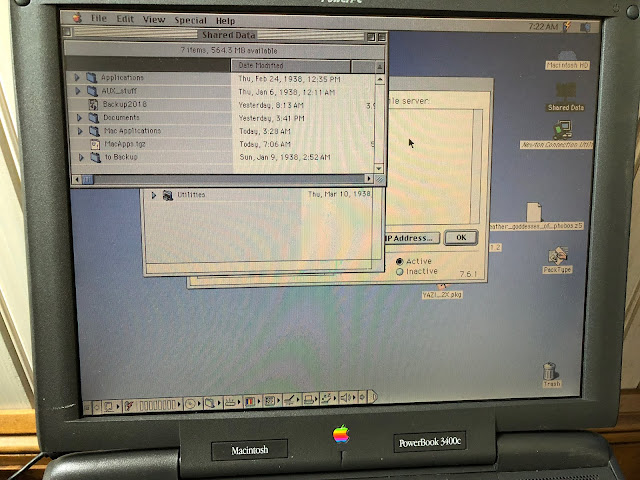 Gather 'round whippersnappers while I tell you a tale of vintage hardware and software and trying to formulate a disaster-proof backup strategy. I installed A/UX 3.1.1 on a Macintosh Quadra 700 about 11 years ago, patched the system as best as anyone could, and even ported a couple of handy utilities including ssh. One thing I never got around to, however, was developing a good backup strategy for this computer from 1993. I had a Zip disk with (supposedly) a Retrospect backup of the the Mac partition of the hard drive, but not a backup of the entire UNIX and Mac system.

I decided to bring this computer back online because it included AppleShare Pro. This summer I have been working on a MacPaint project on a Macintosh 512K and I wanted to store the document somewhere besides a floppy. 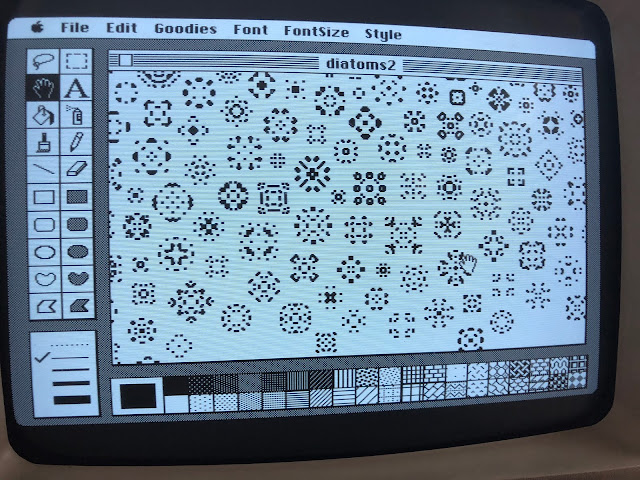 Knowing the throughput on AppleShare Pro was legendary, I decided to use the Quadra 700 that sat unused for about nine years as a file server. This required running new phone lines through the house, but eventually I had the 512K in the play room connected via PhoneNet to the Quadra 700 and several other vintage machines. I was able to use the Chooser to connect to the A/UX AppleShare Pro server from the Mac 512K. 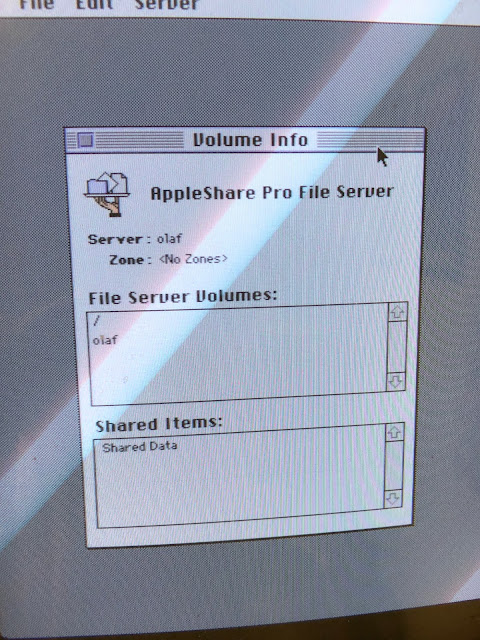 In the end I have the MacPaint document served from the A/UX Mac and work on it over the network. I tend to Save As to a floppy from MacPaint at the end of a session working on the piece to make sure the MacPaint project is double backed up.

I still needed a complete backup of the A/UX system in the event the 25 year old hard drive died. I have a couple Apple branded SCSI hard drives on stand by if that ever happens, but no complete backup to restore onto a replacement drive. After a little examination I figured out that A/UX worked with a SCSI Zip drive. I ran Retrospect again. When I managed Macs at large installations when I was a System Engineer I used Retrospect to backup servers, RAIDs, and clients and I am still recovering from the stress it sometimes caused me. However, I remember it as being as reliable as the media onto which we were backing up (generally tape drives with multiple tapes loaded) and though confusing to set up, it would run well once properly configured. 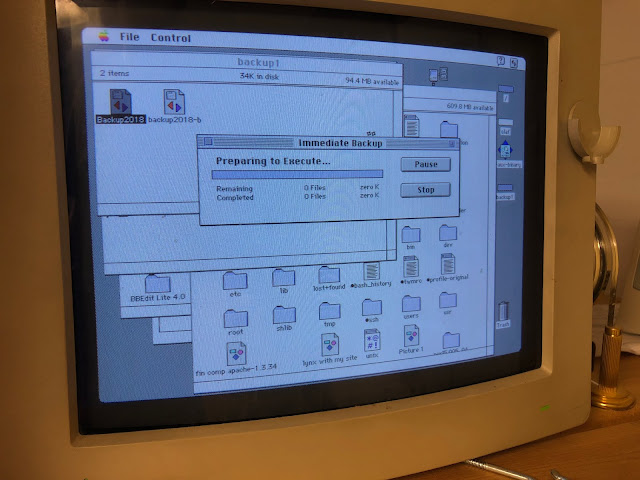 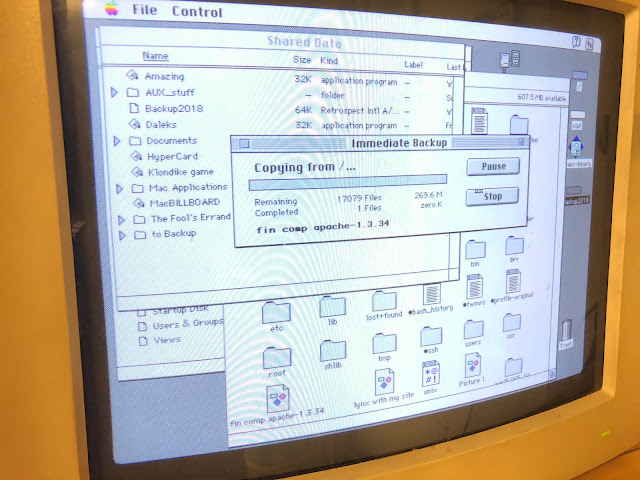 After running an immediate backup I used Retrospect's scripting functions to create an automated backup that ran every other day. 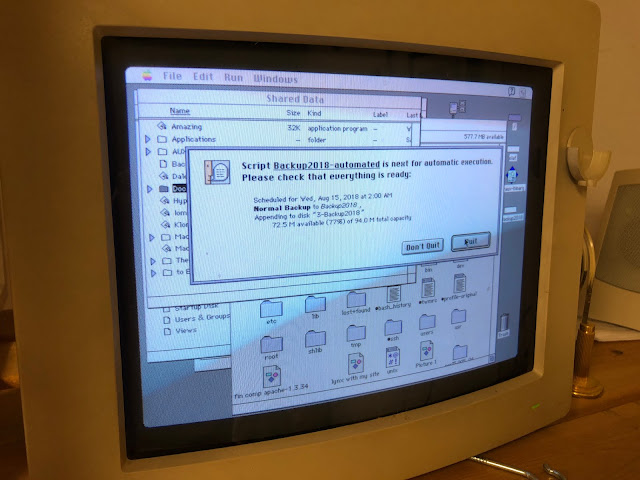 Finally, I had a nearly complete backup of the entire A/UX 3.1.1 system as well as the Mac partition! It spanned three Zip disks. 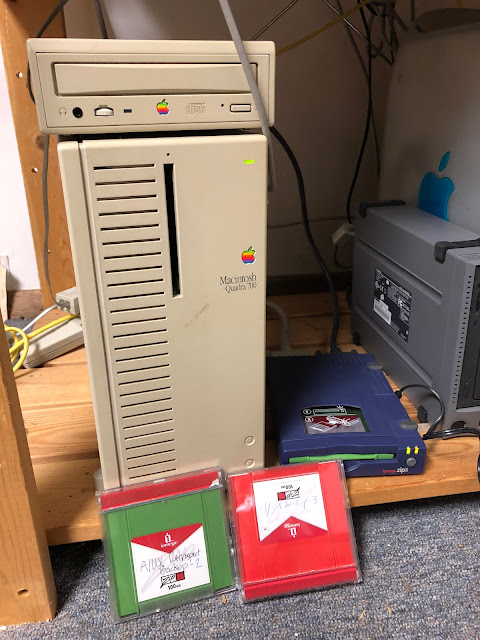 Never one to rest, I wanted a backup of the Mac data outside of the Retrospect backup set in case everything went to hell, the A/UX system died, and I needed access to the MacPaint file of which I am desperately trying to finish Phase I. I originally intended to use a Blue and White G3 tower right next to the Quadra 700 as a backup machine, but its ATA boot drive died after letting it run overnight!

Not to be deterred I booted my wife's old PowerBook G4 and put it on the same switch as the Quadra. I thought I would try to build a version of rsync that was compatible with the RsyncX installed on the PowerBook and use the PowerBook to backup the Mac files. I found that version 2.0.6 specifically mentions A/UX in its configuration file. 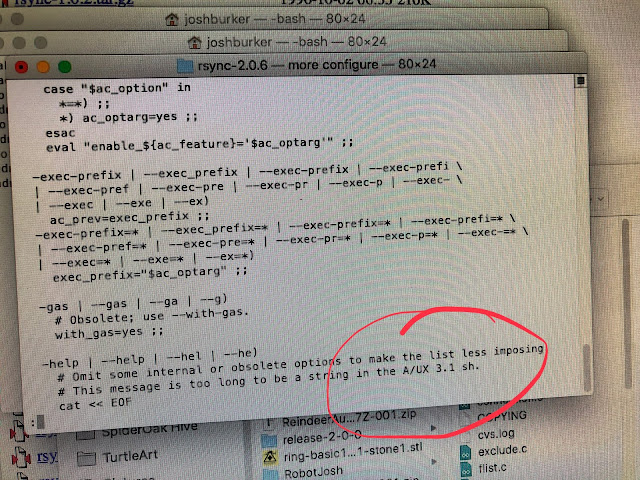 I tried to compile and make a patched version of rsync, one with HFS support, knowing that I might run into issues with the resource forks being stripped from the applications and documents in an rsync version without HFS extended attributes support. Version 2.6.3 of rsync has a patch for HFS support. 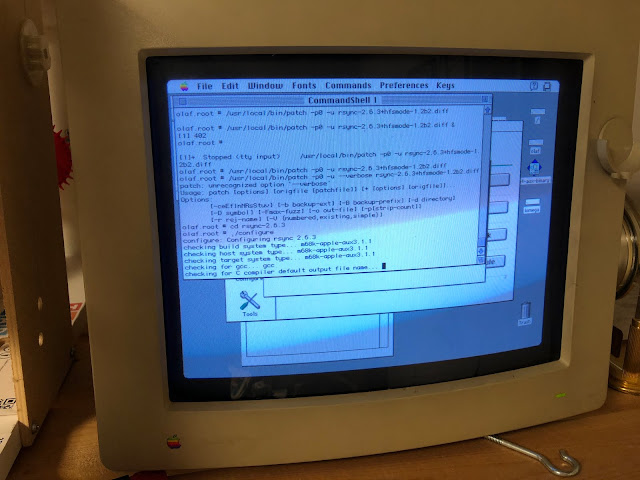 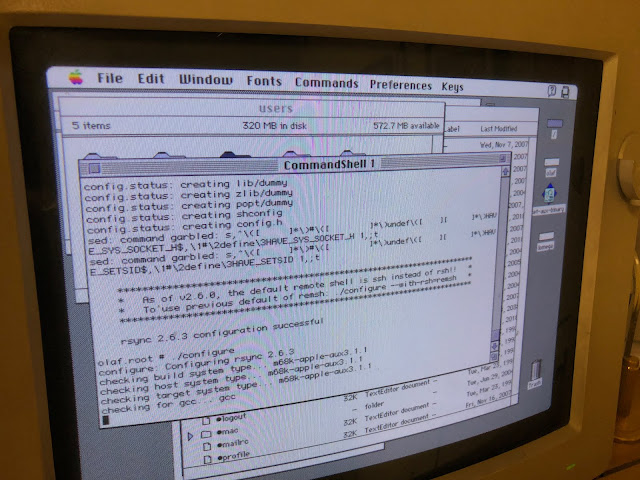 While the configuration was successful, A/UX shat the bed when it came to make. 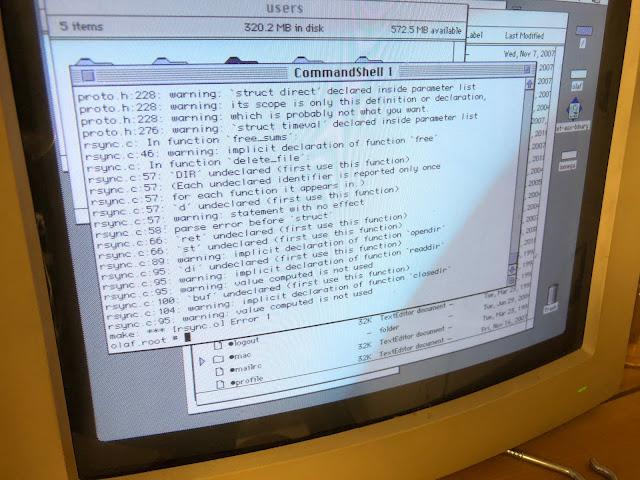 I went back to version 2.0.6 and tried to configure and make. 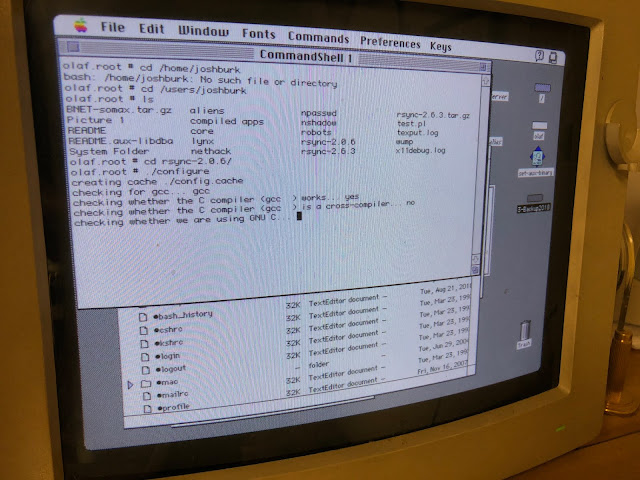 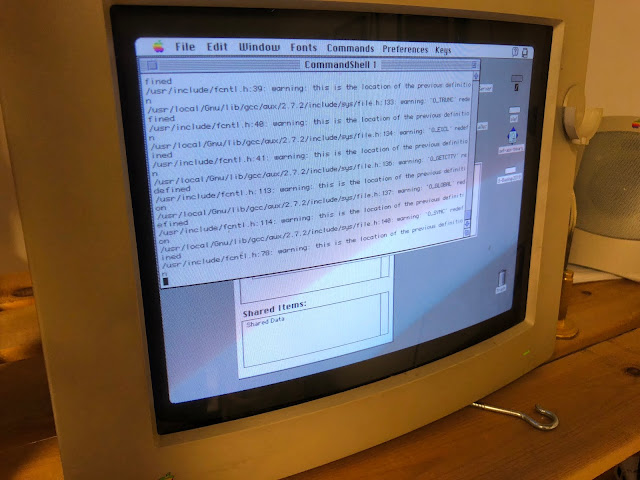 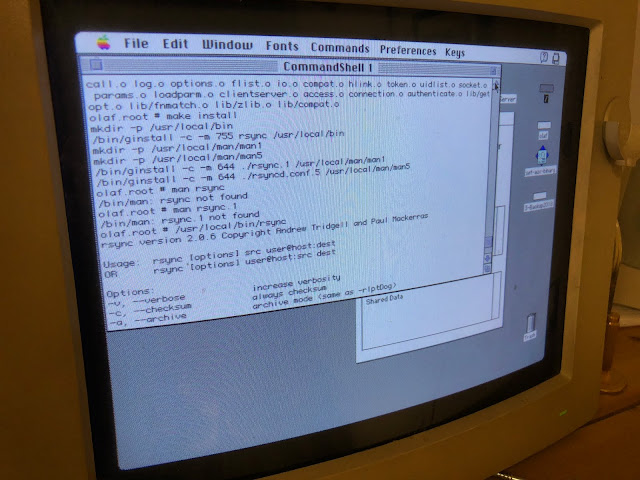 Hopping back to the PowerBook, I was able to SSH to the A/UX machine connected to the same ethernet hub. After a little struggling with using the HFS aware version of rsync on the PowerBook I amazingly managed to use rsync to sync data to a directory on the PowerBook! 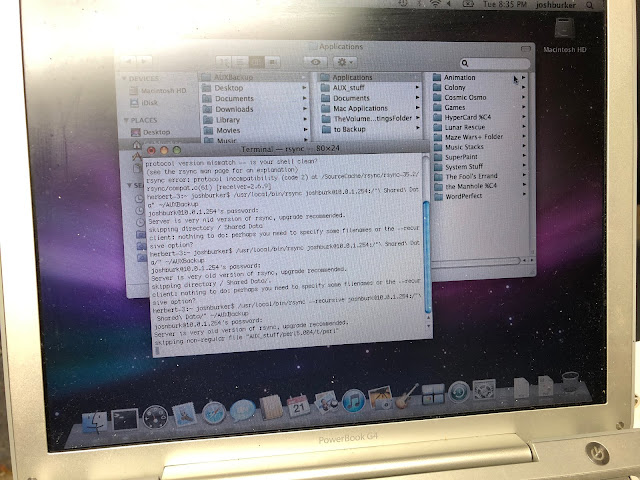 However, since the version of rsync on the A/UX machine was not HFS aware the resource forks did not transfer and the data, while "complete," was corrupted. After finding an rsync 2.5.5 with added HFS support and trying to compile it (and failing), I gave up on trying to use an OS X machine to backup the Mac data.

Before entirely giving up and relying on floppies, I connected my PowerBook 3400c to the LocalTalk network and booted it. Another miracle: the machine (dual booting Mac OS 8.1 and Rhapsody DR2) connected without a hiccup to the A/UX AppleShare Pro server. 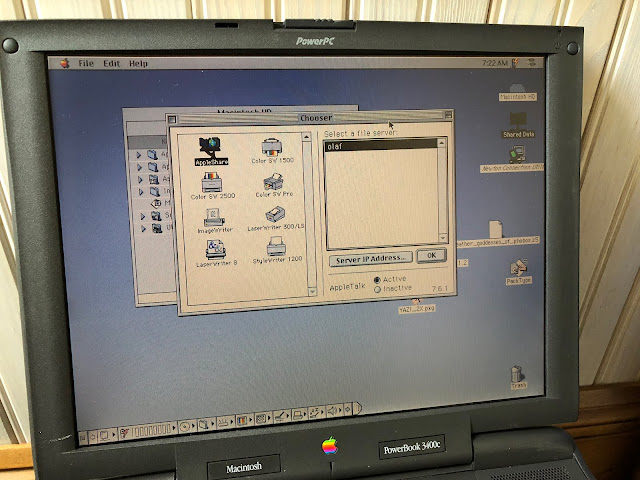 I used one of the Scripting Additions AppleScripts to synchronize the AppleShare Pro Shared Data folder and a local folder on the PowerBook. 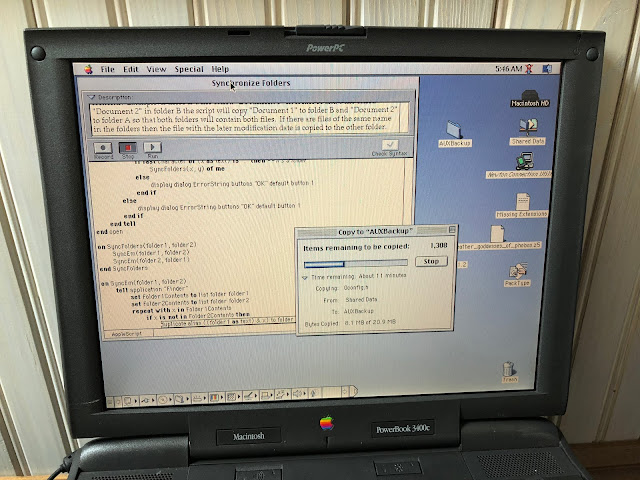 The documents and applications retained their resource forks as any Macintosh Finder copy would be expected. I played around with the AppleScript for a bit, attempting to automate the process, but ultimately the PowerBook 3400c does not support the Energy Saver extension and control panel. I don't want to leave the backup backup machine running 24/7. Rather, I wanted to be able to configure it to boot, backup, and shutdown. A manual AppleScript sync is not the end of the world, and I will continue using a floppy backup as well. Now the MacPaint document lives in three different locations at any time. A/UX has most current version, MacPaint floppy has a version from the last session, and the PowerBook 3400c has a recent copy.

Any time I use the A/UX machine I am sucked into a vortex of old UNIX, old hardware, and unforeseen difficulties. While I was not able to completely script and automate the backup backup process, I do have multiple current backups of the MacPaint document available and Retrospect continues to backup the entire machine to the Zip disk. While this seems like a pointless Rube Goldberg of a system I created for myself, I enjoy working with this old hardware (worth tens of thousands of dollars when it first came out) and creating systems. This was a hard fun project that I feel succeeded despite all the hurdles and sidetracking. As it turns out, one of the simplest means of backing up, a Finder copy, insures my access to this important MacPaint document. 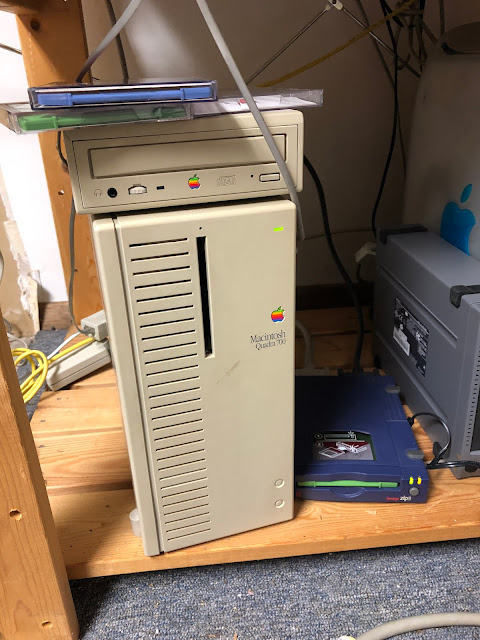